Did You Know Camila Morrone Calls Al Pacino Her Step-Father 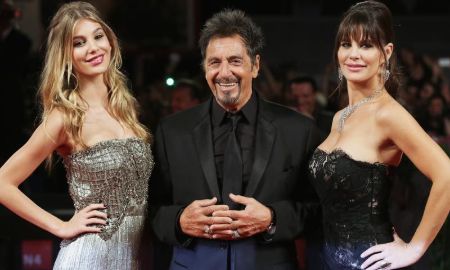 If you are updated with the Hollywood news, then you might well know about the stunning American-Argentine model/actress Camila Morrone from her exceptional work on movies like 'Never Goin' Back' and 'Mickey and the Bear.'

If you still didn't recognize this beauty, then Camila is the step-daughter of iconic star Al Pacino and the sweetheart of Hollywood heartthrob Leonardo DiCaprio. Besides her exceptional role in the showbiz industry, the 22 years old actress has a more intriguing story to unfold.

So here we've brought you with all the details of the IMG Model Camila Morrone parents, early life, love affair, and relation with stepfather Pacino.

Al with his longtime girlfriend Lucila Sola, 43, right, and her daughter Camila at The Humbling premiere at the Venice Film Festival in August 2014
SOURCE: Getty Images

The 77-year-old Pacino is in a romantic affair with Camila's mother, Lucila Sola, 43, for seven years, but they are yet to get married. However, Camila calls Pacino stepfather on numerous TV shows and interviews.

Camila was around ten years old when she first met the 'Godfather' star and grew along with him. So she considers Pacino as her stepfather despite her mother Lucia and Al are yet to tie the knot. They've been together for 13 years now.

Yes, it might be shocking news to many, but it is what it is. She was born from mother Lucila Sola and father Maximo Morrone, who tied the knot on 1997 and gave birth to Camila on June 16, 1997.

Lucila and Maximo are both actors who parted their ways in 2006 after nine years of a marital relationship due to their personal issues.

You May Like: Meet Leonardo DiCaprio's girlfriend, Camila Morrone; Interesting Facts about the model

After the traumatic split with her husband, the then 30 years old, Lucila met Al Pacino in 2007 and fell in love. Their low-key romance sparked in 2018 when they were spotted on a romantic trip at Aspen, Colorado.

On the other hand, his father is now married to a green living expert and media personality, Jen Boulden. The couple shares two children together, Gabi Morrone and Sky Morrone.

To date, Lucila and Camila share a good bond with Pacino and due to which Camila treats Al as her biological father. As a matter of fact, Camila taking to James Corden Show, shared how the 'Golden Globe Award' recipient Pacino helped her giving acting advice when she first landed her role in James Franco's 2013 biopic 'Bukowski'.

But few might know that the 'Death Wish' star Camila and her boyfriend Leo met each other after Pacino introduced them for the first time.

The lovebirds knew each other for a long haul of time, to be precise twelve years ago when she was just 'sixteen.' And now is finally opening about her relationship as she recently appeared in the 2020 Oscars' red carpet with Dicaprio.

Nevertheless, the daddy and daughter shares a good bond filled with immense love and support for each other. They are spotted appearing in many awards shows and TV shows together.