home Fashion Camila Morrone Steps Out in a Wedding-y Dress at the 2020 Oscars Red Carpet with Boyfriend, Leonardo DiCaprio

Camila Morrone Steps Out in a Wedding-y Dress at the 2020 Oscars Red Carpet with Boyfriend, Leonardo DiCaprio 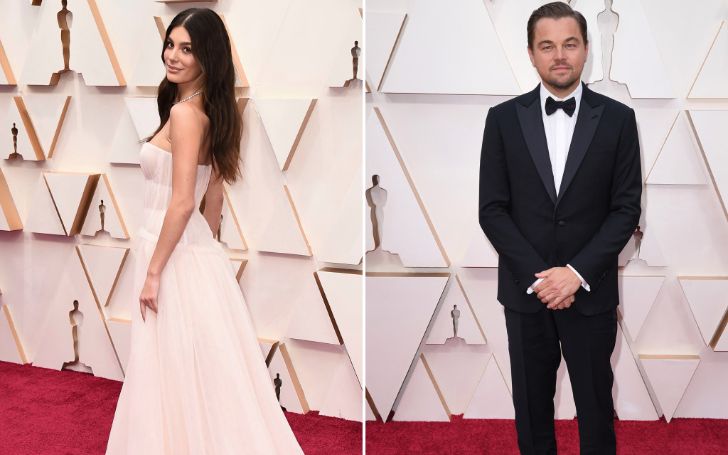 The Hollywood tending couple Leonardo DiCaprio and Camila Morrone were into everyone's eyes as the couple headed to the 2020 Oscars in a wedding-themed dress.

Although the couple attended the red carpet separately, the lovebirds seated together in the front row supporting her man, who was nominated for Best Actor for his 2019 Quentin Tarantino's 'Once Upon a Time in Hollywood'.

Leo and Camila were on the front seat alongside Brad Pitt.
SOURCE: ABC

For the special ceremony, Camila was on a designer Carolina Herrera bridal dress specially customized for the 92nd Academy Awards held at Dolby Theatre in Hollywood, Los Angeles.

You May Like: Brad Pitt Wins His First Solo Oscar; Dedicates It to All His Kids

The beautiful corset bodice gown had a strapless light pink plated with long tails which was originally a white wedding dress from the label's bridal collection.

It was customized by Carolina stylist Micah Schifman imagining it would be perfect for the red carpet. She enhanced the bridal look with natural makeup and a blinged necklace.

Schiffman told the InStyle before the awards show on Sunday night.

We reached out and said, 'Hey, we love this gown…but we don't need it for a wedding. If we could kind of shift it around, make some changes so we started with that silhouette and built the look around that.

On the other hand, the 'Titanic' star Leo,45, opted for a classic Giorgio Armani tuxedo matching up with her princess looks.

The special suit featured a one-button peak lapel outside a white shirt with a bow tie and matching shows which seemed ravishing on the star.

Thou Dicaprio didn't win any Oscars; the couple sure won the hearts of millions of their fans as they were the perfect example of a match made in heaven.

The couple who rarely appears together in the red carpet was lastly spotted together in 2018 during a soccer match in Paris.

And usually, 'The Wolf of Wall Street' star DiCaprio is known for bringing his mother Irmelin Indenbirken to the red carpet, whereas this time he brought Al Pacino's step-daughter instead with a wedding gown which has now made fans speculate with some jolly news on the way.

Hope you enjoyed the article, stay tuned for more Entertainment article only on Glamour Fame.