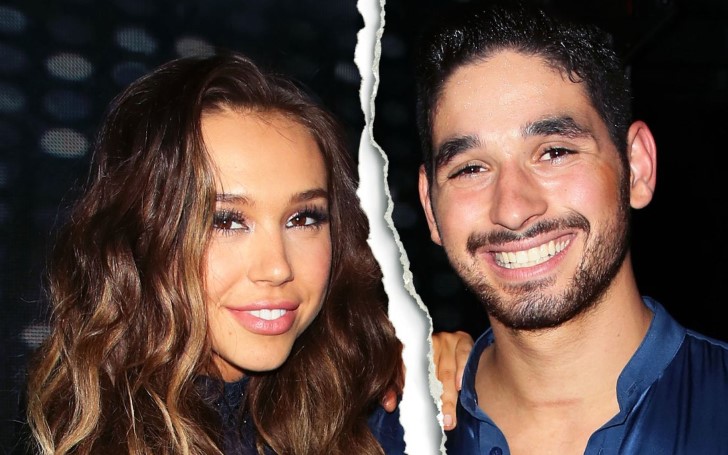 The Dancing With The Stars couple broke up after a few months of romance.

The couple Alan Bersten and Alexis Ren who met and started dating from the season 27 of the show "Dancing With The Stars" parted their ways due to their busy schedule.

Immediately, after calling quits, Ren showed off her single status via a post of a topless photo on her Instagram story.

and her favorite color is

However, the hints about their break up have been around since last Thursday where Ren hinted about their split while responding to a question about Alan to one of her Instagram fan 'feralcatlove'.

'Feelings aren’t black and white and neither is life. We’re focused on our careers and growing as individuals. He’s an amazing person and I’m grateful he came into my life. He’s on his own journey and I respect that.'

Also See:Singer Michelle Williams Separated With her Fiance After Nine Month of Engagement

According to some source, their busy schedule and distance got in their way. Meanwhile, they will still be in each other's lives as friends.

"Alexis is in Japan working and Alan is in LA rehearsing -- he’s about to be traveling cross-country for the DWTS tour, so the distance makes it hard to be in a relationship. But they still talk and are definitely still friends and on good terms. They won’t be in the same place at the same time for a little while because of their schedules, but they’re planning on staying in touch and staying in each other’s lives."

You May Also Like: Demi Lovato Spotted Out Dinner Date With New Boyfriend Henry Levy And Have a Sweet Kiss

Ren first opened up about her feelings for Alan on October 29's episode of the 27th season of the ABC dance competition.

The couple kissed for the first time on the following week’s country-themed episode after the choreographer admitted that he was "falling for" his celebrity partner.

Bersten and Ren were partnered on DWTS' most recent season. Shortly before the season concluded the two revealed their romantic feelings for each other. They placed fourth, with Bobby Bones and Sharna Burgess winning the competition.

Previously, Alan was partnered with American mixed martial artist Paige VanZant on DWTS. The duo was rumored to have dated.

The pair got close after Paige's partner Mark Ballas suffered an injury during the second season of the show. Subsequently, Alan stepped up as his replacement. However, during the semi-finals in August 2017, Paige denied the rumors of their relationship and hinted that the duo is not dating.

Likewise, Alan also had an affair with the DWTS contestant Hayley Erbert. During the Valentine's Day in February 2014, he shared a snapshot with Hayley stating that he was lucky to be with her. However, their rumored affair did not materialize further.

Meanwhile, it remains to be seen if the recently separated pair Alan Bersten and Alexis Ren find joy in their future dating lives.