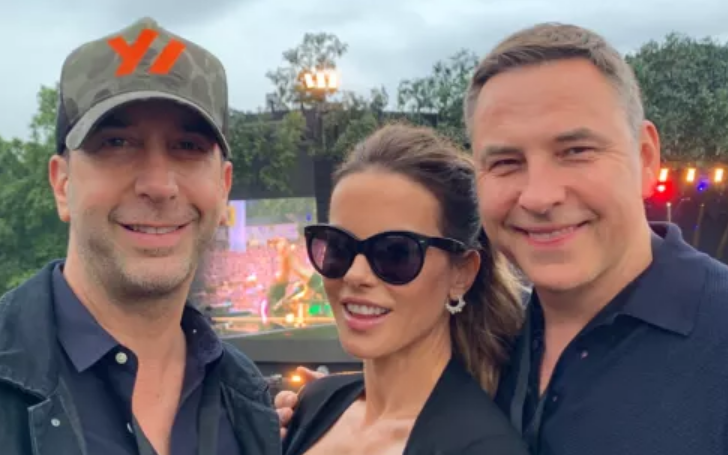 David Schwimmer, Kate Beckinsale and David Walliams not just watched Stevie Wonder together, but they boogied too.

Yep, it sounds too good to be true, but the actors attended the legendary singer’s set at British Summer Time in Hyde Park on Saturday, July 7th.

Friend of Schwimmer and Walliams, The English actress, Kate Beckinsale, joined them and was seen singing with the duo.

The trio filmed themselves as they were dancing and singing to the hit song, Motown classic 'Signed, Sealed, Delivered - I’m Yours' and left us all unsatisfied as 22 seconds was just not enough.

The trio mimed to the famous lyrics and we also got to see some serious dad moves by Walliams and Schwimmer.

The video starts with a sheepish grin by the 'Friends' star, Schwimmer, 52, and the camera pans to Kate, 45, lost in her little world and singing along happily next to ultimate dancer, Walliams, 47.

More than anyone, Walliams showed off his pure skills and mesmerized us with his ultimate dad moves. The sight is an absolute gem.

Read Also: Jessica Alba, 38, Stars In The Cover Of The August Issue Of Cosmopolitan

Britain’s Got Talent judge, Walliams, shared the emotionally rewarding clip on his Twitter and captioned it “the greatest dancer.”

Well, fans around the world have their varied opinions as to who got the towering title. Everyone is picking their favorite, but as far we know, they all deserve a medal for sure.

Recommended: Cheryl Has Got New "Material" Ready Ahead Of A Potential Album Launch

We would like to thank the trio, and not to forget the legendary Stevie Wonders, for taking us back to the time. This is something we will rejoice for the rest of our life.