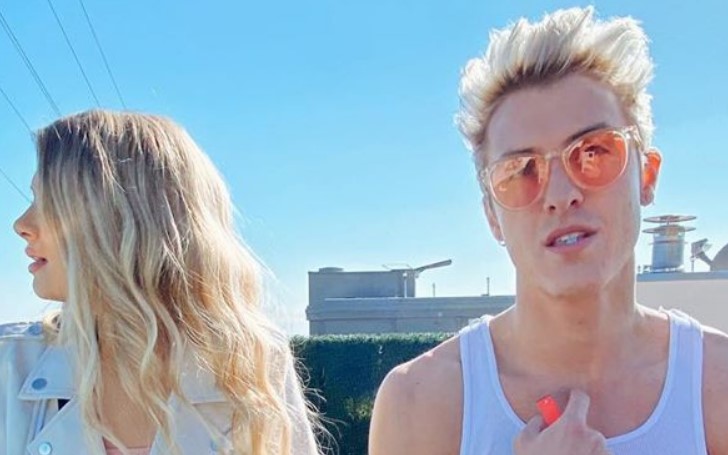 Things look pretty steamy for the new couple, Demi Burnett and her new boyfriend. Call it an announcement or just some casual post from Demi on her Instagram, but the pictures are too hot to handle of the couple as people are suggesting them to get a room after seeing the photo.

While we liked her picture with her new boyfriend, we just wanted to know more who exactly is the person from whom the Bachelor in Paradise star is not shying away to get cozy and post their picture on social media. Well, apparently, that lucky guy is none other than Slater Davis.

Who is Slater Davis, we will discuss it just now, and try to find as much as possible about Demi Burnett's new boyfriend?

The Man in Question, Davis Slater, is a Los Angeles-Based Musician

After a couple of hours of spending time on the internet, we came to know Slater Davis is a Los Angeles-based artist/musician. Slater has been in a music scene for a very long time. When we dived into his music profiles, we found one of his singles on SoundCloud is five years old, which basically suggests, he came to a music scene in late 2014.

Despite already dedicating so much time in the music industry, the artist is yet to make his name in the business. There are only known two-three singles and EPs to his name on popular music platform, Spotify, while his songs and profile get very little attention.

Also See: Telli Swift Net Worth - How Much Does the Deontay Wilder's Wife Earn?

But since he seems to like pretty hard-working, we can assume he will do great in music in days to come. Moreover, the singer/musician's association with BiP's star, Demi Burnett, is speculated to give him the boost on his career he always needed. Let's see what the future holds for him.

How did Demi Burnett and Slater Davis Meet?

According to what report suggests, the now couple knew each other for a very long time; the label of their association was limit to "Friends." However, that changed recently, after the Bachelor in Paradise star, Demi Burnett, on her birthday 25th February, 2020, uploaded a picture of them making out in some fancy restaurant.

Even Davis was not far behind to make their relationship public on social media. On the same morning, the LA-based artist uploaded a picture of them, where he called Demi Burnett his "Babe."

While there were some speculations from the beginning, their doubts came to reality following the Instagram posts the couple posted on their accounts.

We hope we don't need to stress this fact anymore as previously mentioned points are enough to say that Demi Burnett and Slater Davis are dating and now official. Since it seems like a no brainer at first, but there was a twist in the story a couple of days earlier.

According to the reports, Demi Burnett was rumored to be dating her fellow Bachelor in Paradise star, Nick Viall. The claim came when she was seen coming out of Nick's apartment, alone, and it was enough for people to speculate flings between two.

Nick stated they are just friends at that time, which we were just not ready to accept or agree with his words. But a recent post from the Bachelor in Paradise star, Demi, with her new boyfriend, Slater Davis, debunked all those rumors.

You May Also Like: Who is Justin Thomas’ girlfriend Jillian Wisniewski? How Did the Couple Meet?

Well, the two looks perfectly fine and perfect for each other. Congratulation to the new couple, and we hope everything goes well between them in the days to come.