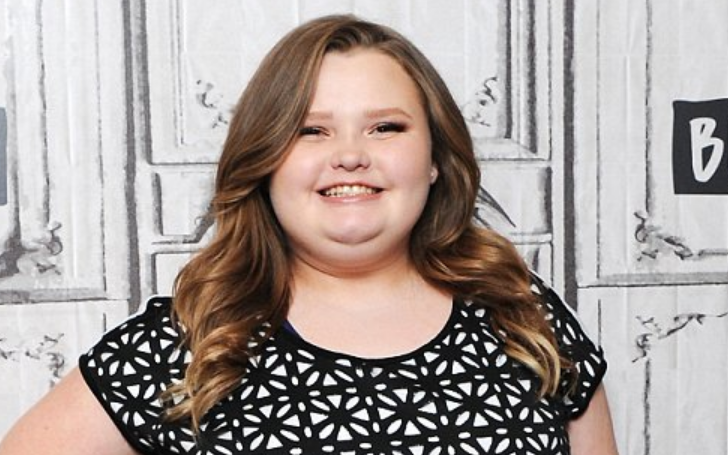 Alana Thompson took to Instagram and filmed herself pretending to snort something on the table which appeared to be a drug.

Alana Thompson AKA Honey Boo Boo pretended to snort something on the table which appeared to be cocaine.

The 13-year-old reality star took to Instagram and filmed herself pretending to line something up on the table and sniff it.

In the video, Alana's sister, Lauryn 'Pumpkin' Shannon, can be heard complaining about the situation from behind the camera.

See Also: Is Farrah Abraham Having A Breakdown?

Lauryn as she sees her sister pretending to snort a drug, Pumpkin shouts, "Alana quit f***ing doing. Don’t even f***ing mimic that on f***ing live! Don’t ever do that again. What you just f***ing did. Act like a f***ing idiot on Live. That’s why you don’t go f**king live on your Instagram."

Alana's family shot to fame on the reality series 'Toddlers and Tiaras, following which the family got their own show 'Here Comes Honey Boo Boo."

But that was short-lived, as Alana's mother, Mama June Shannon, and her boyfriend, Geno Doak, were convicted earlier this year for drug possession. Since then, Alana is living with her sister Lauryn.

According to an online magazine outlet, the couple was arrested in March after June and Geno were caught in a confrontation at a gas station in Alabama, USA. During the encounter, the couple was found with a controlled substance and drug paraphernalia.

Following the arrest, Alana gave a message to her mother; Honey Boo Boo said, "I really hope this is rock bottom for mama because once you hit rock bottom, there’s no more going deeper – you can only go up. I really hope mama’s just thinking, 'I just got arrested. I need to get it together. I need to get my s**t together'. If this isn’t her wake-up call, I could possibly lose her forever."

Such a powerful message from a kid so young, but was it right for Alana to mimick to snort a drug? Well, all we could say is, if jail time was not a wake call for Mama June, this for sure will be one!