The Duchess of Sussex Megan Markle's Instagram account was reactivated this week after having it deactivated for almost a year.

Megan Markle's fans are totally baffled as her very own Instagram page reactivated across the platform around 7 pm on Tuesday night.

It was shocking to see Megan's pictures resurface on her verified account with 3 million followers.

For a few hours, fans of the American actress were once again able to get a glimpse into the luxurious life of the former Instagram influencer. Photos with her dogs, trips to London and so much more was once again publicly visible.

The excitement, however, was short-lived as the account was deactivated within hours with a royal reporter Omid Scobie claiming it to be a technical issue.

See more: Meghan Markle and her Husband Prince Harry Have been Known to Stray from the British Monarchy 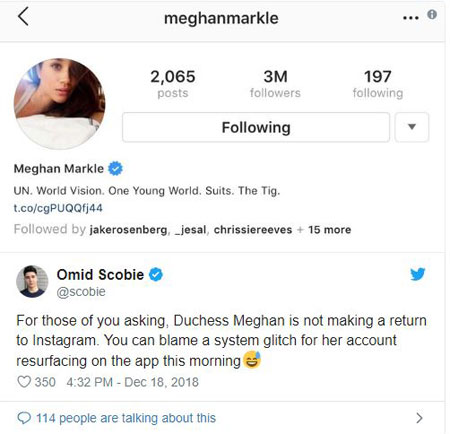 You may also like: Kensington Palace Confirmed that Prince Harry and Meghan Markle are Moving Out,The Real Reason is Here

Megan personally chose to shut down her personal account in January of this year, following her engagement with Prince Harry. In a statement from Kensington Palace, it was explained that Megan has not used these accounts for some time.

If Megan was to activate her social site accounts she wouldn't be the only one to do so. Other royal family members like Princess Eugenie, Prince Andrew, and Sarah Ferguson all have active accounts where they regularly post pictures documenting their lives.