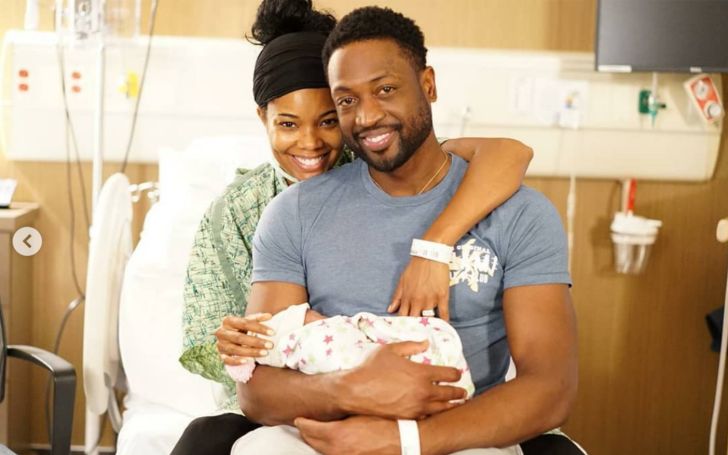 We are quite familiar with how much Gabrielle Union and Dwyane Wade struggled along the way to have baby Kaavia James. Now, the pair is just in seventh heaven as they are relishing in every moment of their baby daughter’s life.

Gabrielle took to Instagram on May 24 to post a video, melting everyone's heart and commencing the weekend on a sweet note by sharing her six-month-old having the most adorable giggling fit.

In the video, Daddy Dwyane can be seen holding Kaavia and is absolutely ecstatic as his daughter expresses herself with tons of laughter. Someone is heard making funny sounds just slightly off camera, which the cute little one just can't get enough of.

Also read: Gabrielle Union And Her Husband Dwyane Wade Looked Anything But Tired Following A Glamorous Night Out At The Met Gala As The Couple Enjoyed A Relaxing Stroll In New York City

Gabrielle, 46, captioned the photo giving a clear indication of her bliss while the baby enriches their weekend. Kaavia was born via surrogate on Nov. 7, 2018, after the couple had tried for years to conceive.

She revealed to fans in her 2017 book We’re Going to Need More Wine that she suffered “8 or 9 miscarriages” and failed IVF treatments as she and Dwyane desperately tried a child of their own. As a matter of fact, the newborn was such a celebration for the couple that Gabrielle Union also took it upon herself to honor her daughter by designing Baby Clothing Line.

Check out: Gabrielle Union and Dwyane Wade envision life after the NBA

Fans of the couple couldn’t help but comment on the sheer happiness the family unit oozes One person gushed,

“My favorite thing in the world!!! Baby laughter!”

While another went on to write about how nothing is sweeter than a "child’s laughter!” Moreover, fans also had a keen eye for how Kaavia is resembling her dad as she grows, One fan observed:

Now that the 37-year-old star has retired from his prolific NBA career starting April 9 after a groundbreaking 15-year run in the league, he has more time to dedicate to his family.

It is confirmed the family is now outbound on a vacation after a long time, as Gabrielle announced earlier that they were embarking on the #wadeworldtour2019, fans can't help but anticipate what their summer travels have in store.