Elizabeth Hurley flashes her assets as she goes braless at Rocketman Premiere.

Actress Elizabeth Hurley who is no stranger to setting pulses racing with busty looks donned a skintight, white pinstripe sequin Versace suit showcasing her incredible curves at the "Rocketman" UK premiere in London.

Elizabeth teased her cleavage as donned a form-fitting double-breasted blazer, opting to go completely braless underneath. The suit jacket was cinched in at her waist with two silver bedazzled buttons, while she paired the top with the matching trousers. 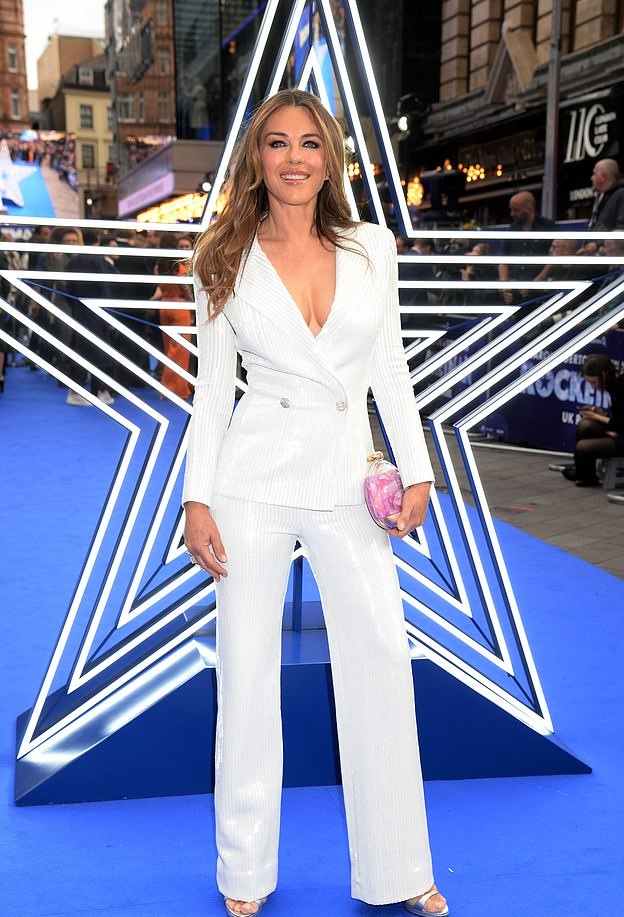 The pants were fitted at the top and loose and wide at bottoms, highlighting her amazingly toned legs. The 53 years old accessorized her gorgeous suit with metallic silver platform ankle-strap stilettos, a marble-effect pink circle clutch, and dazzling diamond earrings.

The German Supermodel displayed a bronzed glow and enhanced her natural beauty with a sultry metallic smokey eye, extra dar eyeliner, and a glossy nude lip. Instead of her usual flipped out chestnut brown curls, she opted for soft, loose waves.

The Bedazzled star who recently revealed the secret behind her age-defying looks also added a sweep of rosy blush across the apples of her cheeks as she flaunted her youthful visage.

Rocketman premiere in London. A BRILLIANT movie about a truly brilliant man @eltonjohn . It’s an extraordinary film with superb performances. I LOVED IT 😘😘😘😘😘

The brunette bombshell also shared the snap to her 1.2 million Instagram family. This deadly drop post of her gained 32.4K likes and above 500 comments.

The actress-turned-businesswoman attended the star-studded event in order to support her close friend Sir Elton John. Rocketman is a biographical musical fantasy movie based on the life of musician Elton John.

Recommended: Richard Madden Is Reportedly In Talks To Join Marvel's 'The Eternals'

Stepping out in NYC to host the #HotPinkParty fundraiser for @bcrfcure. For the past 25 years, @bcrfcure has been deeply involved in every major breakthrough in breast cancer prevention, diagnosis, survivorship and metastatic disease. Funding research is the only way to put an end to breast cancer. I’m honoured to be the Global Ambassador for the @esteelaudercompanies Breast Cancer Campaign #timetoendbreastcancer 💗💗💗💗

The event hosted by the Global Ambassador of The Estee Lauder Companies, Hurley raised $6 million for breast cancer research on behalf of the organization.