Emilia Clarke Told Her Mother The Ending of 'Game of Thrones' 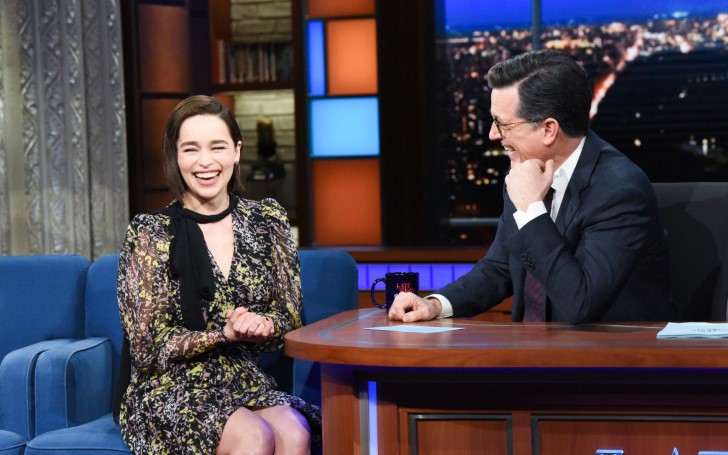 Emilia Clarke reveals her mother knew the ending to Game of Thrones.

The actress who plays Daenerys Targaryen in the hit HBO series Game of Thrones says her mother was already aware of the ending of the fantasy series, but fortunately, her mom has "forgotten" what she told her anyway.

During an appearance on The Late Night Show on Tuesday, the mother of dragons admitted she had broken the rules of Game of Thrones by spoiling someone of the events in the GOT world who happened to be none other than her own mother.

The host of the show, Stephen Colbert asked Emilia whether she had told anyone the ending of the series. The actress replied:

"I've got to be honest, I did... I wasn't supposed to, I told my mum. The good thing about telling my mom was that she's a vault. Because she's [already] forgotten it."

Funnily enough, Clarke's mother does not remember any of it as she could not recall the details when Emilia offhandedly mentioned to her mom she already knew what happened.

Also Read: Emilia Clarke Has No Regrets Over Her Nude Game of Thrones Scenes

Colbert claimed he was slightly jealous as he wanted the ending told to him time and again. He reiterated, "I'm kind of jealous of your mom."

The GOT star then joked, "If she falls asleep on a plane, I'm quite worried she's going to say it [talking in her sleep] and not know it happened."

As the conversation went on, Clarke got more serious and revealed she started crying after reading the final script. In order to process the script, Emilia claimed she ended up walking the streets of London for over two hours.

"I went for a very long walk... I couldn't quite handle that. It should have been raining, it was that kind of a moment."

Clarke then addressed her recent New York essay talking about her two brain aneurysms and brain surgeries she suffered amidst filming the hit HBO series. Colbert asked her if her outlook on life changed following the experience.

"Being completely honest, it made me petrified most of the time. I wish I could sit here and say, 'I was like, let's go jump out of a plane.'" The actress then joked, "But I did do Game of Thrones, which was similar, certain seasons."

In the essay, Clarke described "a sense of doom closing in" after her first brain surgery. This was after she began experiencing troubling memory problems. She wrote: "In my worst moments, I wanted to pull the plug. I asked the medical staff to let me die. My job — my entire dream of what my life would be — centered on language, on communication. Without that, I was lost."

Meanwhile, on the show, Emilia said she felt "lucky" to be alive as she began to gain "perspective" on everything that transpired in her life.

The final season of Game of Thrones returns to HBO on 14th April.