home Entertainment Esther the Wonder Pig getting the Hollywood treatment

Esther the Wonder Pig getting the Hollywood treatment 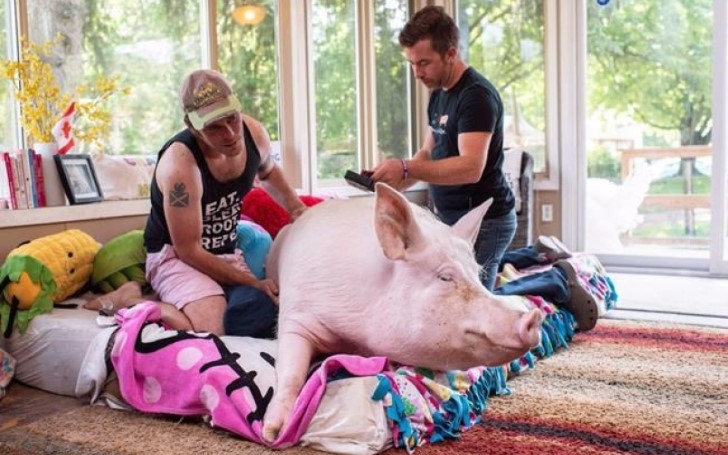 The social media sensation, Esther aka the Wonder Pig is going to Hollywood to have its own featurette.

The Wonder Pig has already had her adventures detailed in a series of books, which will now be serving as the basis for a new movie, Esther owners announced on Twitter (@EstherThe Pig).

"A few months ago we signed an agreement with one of Hollywood's largest production companies and a major Hollywood studio, to adapt our books for a feature film. We were obviously excited, and so began almost a year of arbitration to make it a reality," added Esther’s owner.

Esther resides at the Happily Ever Esther Farm Sanctuary which is situated halfway between Guelph and Milton, a farm and education center that the Yorkshire shares with many other rescued animals.

Don't Miss: The Flash Movie Is Getting Another Rewrite and a New Producer

Esther is renowned for its merchandises such as t-shirts and also for several other sanctuary farms outside the Canadian city of Guelph. The Wonder Pig has become a worldwide social media phenomenon, with her own 1.4 million followers on Facebook, 504,000 followers on Instagram and 59,000 followers on Twitter.

The featurette project inspired by the book, Esther the wonder book is set to venture by CBS network. The studio has already on-boarded, Mikki Daughtry and Tobias Iaconis, the screenwriters behind the in-house’s upcoming film, Five Feet Apart starring Cole Sprouse and Haley Lu Richardson. In addition, Jack Leslie and Lauren Shuler Donner of Donners’ Company— that produced the animal rescue films Free Willy (1993) and Hotel for Dogs (2009), are producing this project.

The flick will unfold the real event of a couple, Jenkins and Walter adopting a piglet (an American Yorkshire) and its consequences in their life. Over the course of the times, Esther originally of mere five pounds grows to 650 simultaneously astounding the nearby community and millions of online followers as well.

With their growing enthusiasm towards Esther, the real-life couple, Jenkins and Walter even launch Happily Ever Esther Farm Sanctuary, a caring foundation for several other animals in need. The foster couple along with Californian novelist, Caprice Crane, have since gone on to write three New York Times’ bestselling books: Esther The Wonder Pig (2016), Happily Ever Esther (2018), and the picture book of Esther The Wonder Pig (2018). As for now, the trio is working on another children’s book and a cookbook titled Esther Approved! Esther, Jenkins, Walter, and Crane are represented by Trident Media Group (a New York-based literary agency) and LaPolt Law (a boutique law firm in West Hollywood, California).

Similarly, Mark Ross of the CBS Films will be supervising production on behalf of the studio.

Besides the Esther movie, Donner Company’s upcoming big-screen projects include the film adaptation of Sherman Alexie’s The Absolutely True Diary of a Part-Time Indian for Fox 2000, Tommy Orange’s critically-acclaimed novel, There There for HBO, and female actioner, Twin Blades, for Cristal Pictures.

HBO also has an upcoming slate, The Curse of La Llorona (April 19, 2019), from Warner Bros and producer James Wan of Aquaman. The soon-to-be-released horror film is co-scribed by Georgian writer Daughtry and a German screen-writer, Iaconis both of whom are repped by Lit Entertainment Group and Verve.