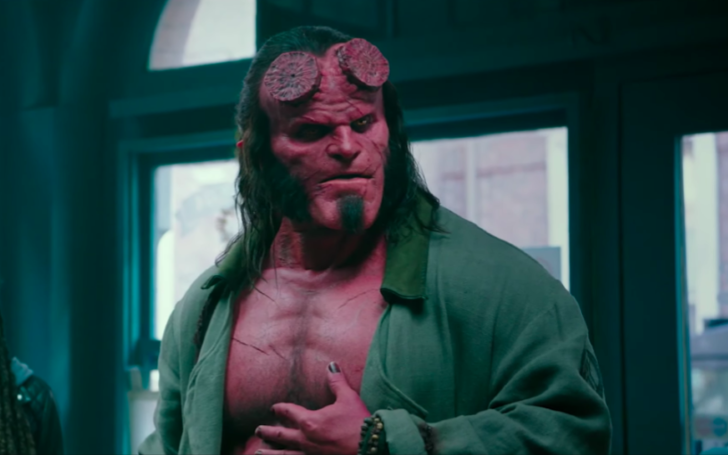 The second trailer of Hellboy shows the film has more bloodiness than any of its predecessor movies.

Lionsgate has recently released an R-rated trailer for its upcoming movie Hellboy (a rebooted version of the original franchise—comprising of two movies Hellboy 2004 and Hellboy: The Golden Army, 2008. And the footage is as badass as anyone could guess for. This second trailer for the revived movie also features a new behind the scene actor, David Harbour of Stranger Things as the film’s titular character Red aka the Hellboy which was previously played by Ron Perlman in both two films of the franchise.

In addition, the new clip also shows some noticeable change in Hellboy’s age; the film lead character this time is being depicted as more younger, rougher and even more volatile than the previous Hellboy. Based on Hellboy comic arcs Darkness Calls, The Wild Hunt and The Storm and the Fury, the film appears to be rammed up with cool monsters and satanic imagery. We can also see Korean-American actor, Daniel Dae Kim playing the alter ego of Ben Daimio who for the time being is featured into the trailer as some form of Jaguar monster. This second footage also shows some great daring from The-Son-Of-Fallen-One—the segment where he is seen wielding a sword while riding a dragon-like pet-monsters was unlike anything we’ve ever seen in the earlier films.

But while the horn-headed hero is shown a bit de-aged, the red-band trailer hints that the hero rather wants to be taken more seriously than ever. The clip also boasts supernatural violence accompanied by super bloodier combats as well as few or two f-bombs—all taking place in the surroundings, more demonic than the previous two installments’.

The original two films were directed by Academy winning director, Guillermo del Toro (though the days were before The Shape of Water had put an Oscar on his mantle). But this time, the sorcerous hero is being brought into the big screens by a different helmsman, Neil Marshall, who is quite prominent in the thriller genre being known as the filmmaker of 2005 underground horror thriller, The Descent.

Also Read: 'Edge of Tomorrow' is Officially Getting a Sequel

In addition, the director is also equally popular for cult hits like Dog Soldiers (2002), Doomsday (2008), and Centurion (2010). Though, the helmsman's most successful achievement to date remains his directorial work for two memorable episodes of HBO hit series Game of Thrones (Blackwater and The Watchers on the Wall—the later which brought him an Emmy nomination).

Despite the fact, the current Red looks to be a bit different in persona than the previous one, the books ardors are still favoring this version of Hellboy to have been downright accurate with the Dark Horse’s comics—a character which resembles more with the artist, Mike Mignola's real vision of Man-Beast. Another noticeable change in the films set up is being the absence of Red’s best buddy, Abe Sapien, (Doug Jones) who we saw playing the fastidious, fish-faced colleague in the previous two movies.

Recommended: The Flash Movie Is Getting Another Rewrite and a New Producer

Director, del Toro was always fascinated by the dramatis personae of Abe Sapiens. And it was because of this intimacy that led the director to once again cast the character in his next venture, only this time in a whole different movie, The Shape of Water. Jones, who played the personality of the Abe Sapien can also be seen in another project, a TV series, Star Trek: Discovery, where the actor/ director is portraying the character of St. Laura.