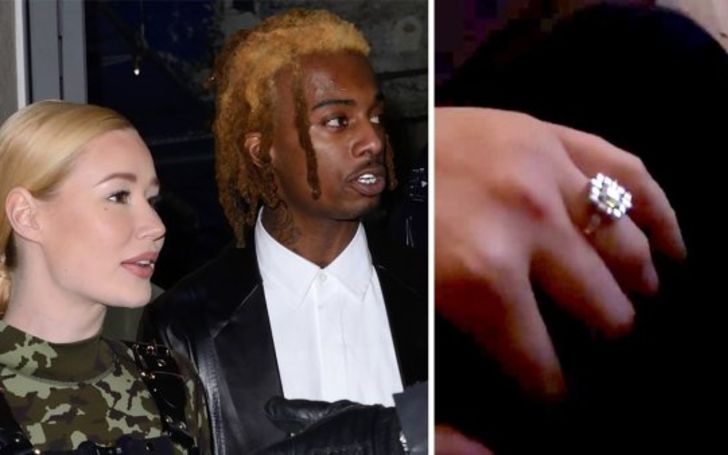 Fans around the world are asking if the Australian rapper, Iggy Azalea got engaged? People are speculating the rapper is engaged after Iggy was spotted with a diamond ring.

The Australian rapper and her boyfriend, Playboi Carti, sparked rumors of their engagement when Azalea posted an Instagram story on Thursday night of July 4.

The fans were quick to spot a massive diamond ring on Iggy's ring finger and speculated the rapper is engaged to her boyfriend, Carter.

The couple, who started dating since last September, is yet to confirm from their side but fans seem convinced already.

Some reports claim the ring appears to be from designer Stefano Canturi, the ring which features a large emerald or cushion-cut center stone surrounded by a geometric ring of smaller emerald-cut diamonds is Canturi's signature design 'Stella.'

Also Check: Iggy Azalea Slammed Person who sent her Semen in the Mail

Iggy Azalea and Playboi Carti have been very secretive about their love life ever since they started dating, and rarely talk about other in interview or post photos on social media.

But in a recent interview, Carti, 22, revealed how he met Iggy. The 22-year-old rapper said, "Once I started talking to her, I just cut off everybody. It was over with."

If fans speculation is true, this would be second engagement for the 29-year-old rapper, Iggy. Azalea was previously engaged to a basketball player, Nick Young, with whom she broke up in June 2016.