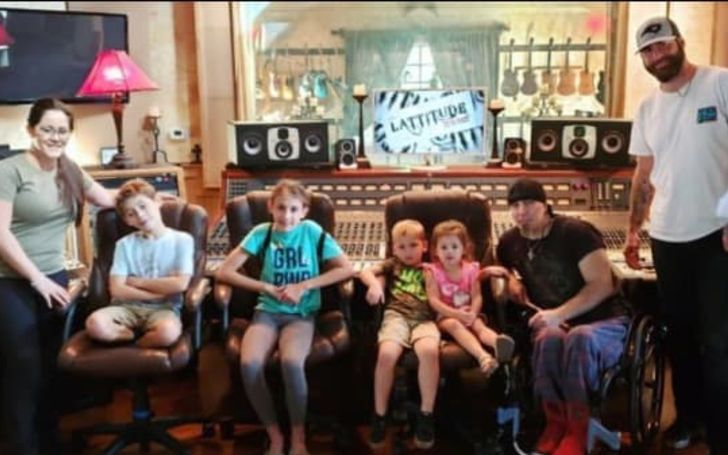 Jenelle Evans planning to route her career towards the music industry.

If you have been following one of the controversial families then you might know Jenelle Evans for her psychotic husband David Eason, family dramas, and all the obliged scandals.

But recently on Instagram Jenelle shared few snaps of her journey to the music academy at Nashville, Tennessee.

Evans who got fired from MTV's 'Teen Mom 2' which put a 'full stop' to her reality star career due to the violence caused by David's act of shooting and killing their bulldog 'nugget', are shifting their career from TV stars to musicians.

After gaining back the custody of the children Jenelle, 27, and Eason, 31, have been quiet responsive parents who take care of their children as they are lately witnessed spending times with their kids.

A series of snaps shared by Evans showed David performing along with children where he played launchpad, Kaiser on drums and Maryssa on the equalizer wearing headphones.

Jenelle shares they have learned music in the past and played in their own band.
SOURCE: Jenelle Evans Instagram

After the show cut off the 'Read Between the Lines' author, her media career declined liked the lights of dusk. On the same token, Evans makeup line 'JE Cosmetics' didn't do quite good and was reported to be dropped by the manufacturers.

Trying to color up the grey shades, now the family-of-five decides to incline towards a new phase in life trying new ways.

Alongside the set of snaps Evans captioned "Yesterday we took the kids to the #MusicansHallOfFame in #Nashville and the kids had a blast!"
SOURCE: Instgaram

The recent Instagram articulated them going on a Musicians Hall Of Fame & Museum and all their kids passionate about music.

So guys what do you think about Eason family's new musical career? Do you think they will be able to do well in the field?

Stay tuned and connected to find updates of Entertainment article on Glamour Fame.