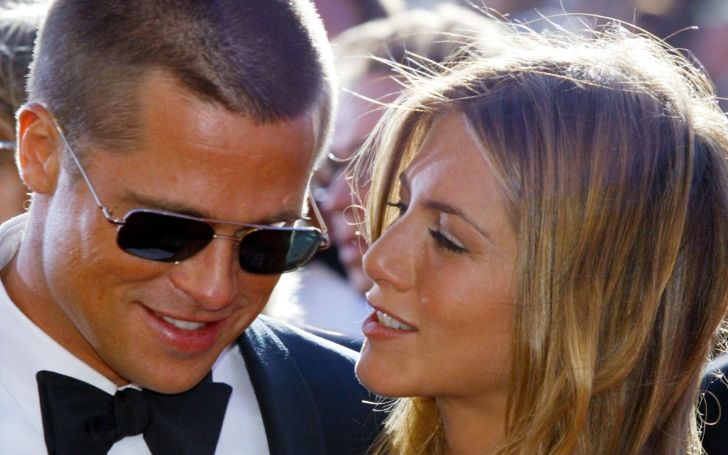 Brad Pitt and Jenifer Aniston cleared the fog about their rumored relationship mingle.

Over the months, the Hollywood sensational couple was rumored to be dating again. Sad to many Brad Pitt and Jennifer Aniston lovers, both the parties denied the news.

As per reports by New Idea, the Hollywood stars are now a close 'friend' and are together in Italy for the annual 76th Venice Film Festival.

Paparazzi snipped a picture of Brad chilling in the romantic Italy on a lavish boat "Confusion."
SOURCE: Daily Mail

On the recent trip, the Fight Club star was spotted with an anonymous woman whose face was not completely visible as it was covered with a wide-brimmed sun hat.

But reporters suspected it was the Friends star due to Jennifer's signature honey color blonde hair. Moreover, the women wore similar hat where Aniston was snipped in another shot. An insider told New Idea,

Since arriving in Italy, they have made no effort to hide away and are acting like a normal, happy, in-love couple.

It's not the first time Brad, 55, and Aniston, 50, were spotted together. Back in February, Brad was seen attending Jennifer 50th birthday bash. Brad's attendance, however, only made us believe they were friends again.

The former lovebirds were later rumored to be locking lips in Malibu by reports, but there are no photographs.

The lady on the left is highly suspected to be Jennifer Aniston.
SOURCE: Daily Mail

However, both Jennifer and Brad denies their so-called secret relationship. The couple who tied the knot in 2000 later walked on the edges on 2005 following some controversial issues which Aniston recently unveiled in an Interview.

What do you think? Are they back together and hiding us with the facts? Well, we sure do wish the Hollywood heartthrobs to get back together. Stay tuned and connected to find updates on the news.