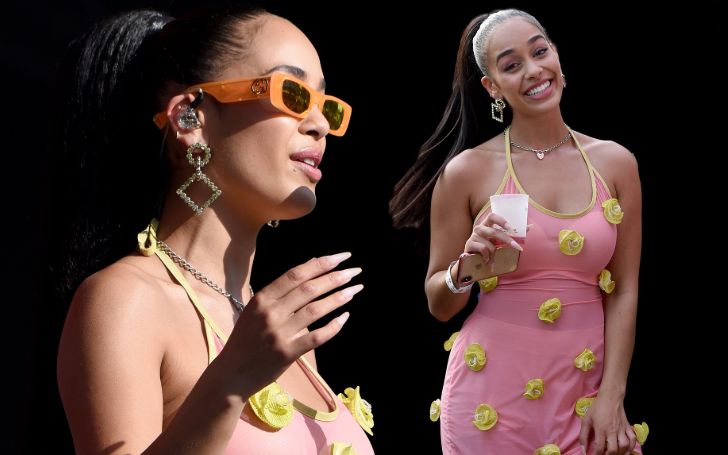 Blue Lights hitmaker Jorja Smith was ravishing as she attended the Made In America musical festival on Saturday.

The 22-year-old singer slew the stage with her mesmerizing look on the alluring pink mini dress with beautiful yellow flowers designs.

Jorja added charm to her dress wearing a trendy orange-box sunglass with a pair of square shape earrings and matching the diamond necklace.

The gorgeous sensation was enticing in her ponytail hair styled on her raven locks. Her look was similar to singer Rita Ora's black floral mini dress she opted for the Formula E championship in Chile.

The 'Don't Watch Me Cry' hitmaker is doing pretty in her career. She has been going strong since January 2016 and collaborated with some of the famous artists like Drake, Kali Uchis, Kendrick Lamar, and Stormzy.

In such a turning point of her career, Jorja insists she does not want Rihanna level of fame. FYI, Smith's nominated for some of the prominent titles such as Grammy Awards, the UK Video Music Awards, and the Soul Train Music Awards. We sure do suggest her to enjoy the fruits life's offering her.

As of now, the American singer seemed pretty confident as previously she was body-shamed on social media by critics and had to deal with a lot of made up gossips over tabloids and magazine related to her controversial relationship status.

'To Be Honest' hit-maker is different than other celebrities as she has a different perception towards music and fame. Nevertheless, this time the sensational 'beauty with brain,' Smith shut the mouth of many with her raunchy looks and confidence.

Stay tuned and connected to find more intriguing articles on your beloved celebrities.