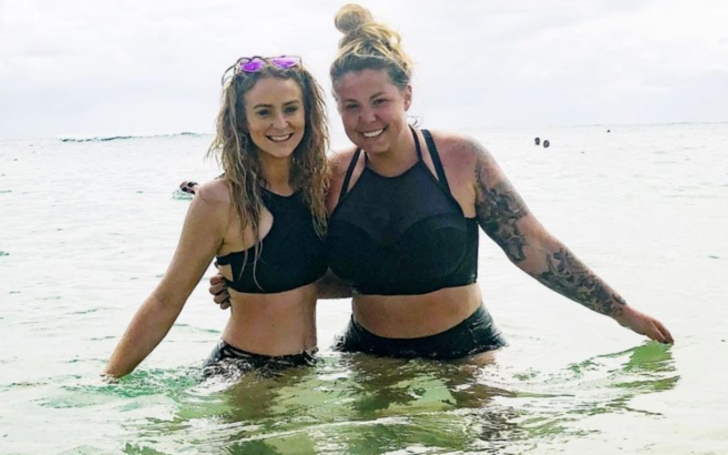 A New couple in town?! Seems like Teen Mom 2 stars Kailyn Lowry and Leah Messer are spending way too much together then one would've expected and it is giving rise to the rumor that they might be more than just friends.

Though the duo has been friends for several years now, things might've taken a different turn for them in the last couple of weeks. It all started when the two hot mamas went on an exotic vacation in Costa Rica and shared numerous hot and steamy pictures.

My chick bad, badder than yours 😉 #hotsprings #costarica #mybitch @kaillowry

In many of the pictures, the caption served as a catalyst to further confirm the rumors of their affairs. While she divulged that her chick is badder than ours, Leah, in one of her post claimed the trip to be 'Once In A Lifetime.'

The rumored love birds aren't too afraid to click several PDA-filed pictures. As we all know, 'A Picture is worth thousands of words,' more than one seemingly confirms the rumors.

Many of her fans even started shipping them and asked Leah to 'Wife her up'. One user said, “Y’all could have six kids — three girls, three boys — and never worry about baby drama again. Wife her!”

Whereas, one user, while talking about the heartbreaks the duo faced in the past wrote, “I feel like y’all have the worst luck with men and should just start dating each other.”

Well, both of them are a proud parent of three kids each, Leah to 9-year-old twins, Aliannah and Aleeah, and 6-year-old Adalynn, and Kailyn to Isaac, 9, Lincoln, 5, and Lux, 20 months. And recently, Leah reportedly stated that she wants more kids so we might see an addition in the family soon.