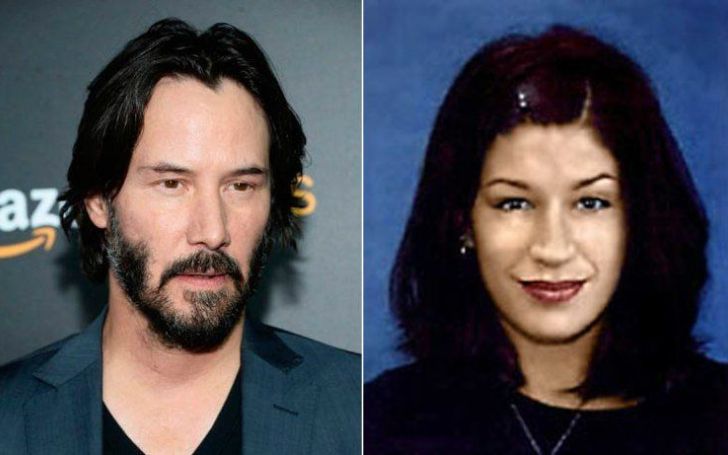 The late Hollywood sensation Jennifer Syme was one of the renowned assistants in the Hollywood industry as well as a prospering actress. Sad to say but her sky-high career was sadly cut short after the actress died at the young age of 28 in 2001.

Find out all the in-depth details about her demise, relationship with Hollywood heartthrob Keanu Reeves, and Wiki Bio,

Born from a cop father Charles Steves Syme and wife St John on 7th December 1972, Jennifer was born on the town of Pico Rivera, Los Angeles.

Jennifer belongs to Irish and English ancestry. But sadly her parents got divorced at an early age and she grew up most of her childhood alongside her mom.

Since the early age of sixteen, the gorgeous star personality was fascinated by music and movies and initially applied as an internship for a production assistant.

A dream turned to reality, Jennifer was hired by a filmmaker David Keith Lynch where her groundbreaking chance to production line was from 1997 movie, 'Lost Highway' and subsequently she started working in various movies.

To be honest, their story is sadder than William Shakespeare's novels as Reeves Keanu's girlfriend Jennifer Syme, who initially met each other during a promotional party for Reeves alt-rock band Dogstar where they "instantly fell in love".

We usually don't hear Reeves's relationship and affairs much compared to others, but there was a time when the iconic star was madly in love with Jennifer Syme.

Find Out: Is There Any Truth To Keanu Reeves & Angelina Jolie Relationship Rumors?

The cupid's arrow hit the lovebirds in 1998 and they dated for two years and subsequently got engaged. Later, Jennifer was pregnant with Reeves child a year later in 2000.

Bad Luck Starts to Take Off

The grave of Keanu and Jennifer's premature baby.
SOURCE: Pinterest

Sadly fate was not kind as the couple lost their stillborn daughter at eight months. Unfortunately, the child as miscarried, and due to the grief of losing a child, it started rooting problems between their blissful relationship.

You May Like: What Happened To Keanu Reeves' Daughter? Does He Have Any Other Children?

Keanu and Syme were so excited for the baby; they even named the unborn girl by Ava Archer Symes-Reeves.

The trauma left them so devastated that it eventually led the couple part of their ways; however, they remained good friends.

The Harsh Death of Jennifer Syme

A year and a half on, Syme was found dead due to a fatal car accident on April 2, 2001. She was on her way back from Marilyn Manson's party in Cahuenga Boulevard at Los Angeles.

Prior to that, Jennifer initially attended the party on April 1, 2001, and was returning to the party early morning the next day. Unfortunately, she drove the car into a row of parked vehicles and partially ejected from the vehicle and died instantly.

As per lab reports, the 28-year-old was high on alcohol and was not wearing safety seatbelts.

But on the recent red carpet, we are happy to see Keanu finally moving on after 19 years as he recently seemed in a serious relationship with sculpture and painting artist Alexandra Grant.

We hope you enjoyed the article. Stay tuned and connected to find more intriguing articles only on Glamour Fame.