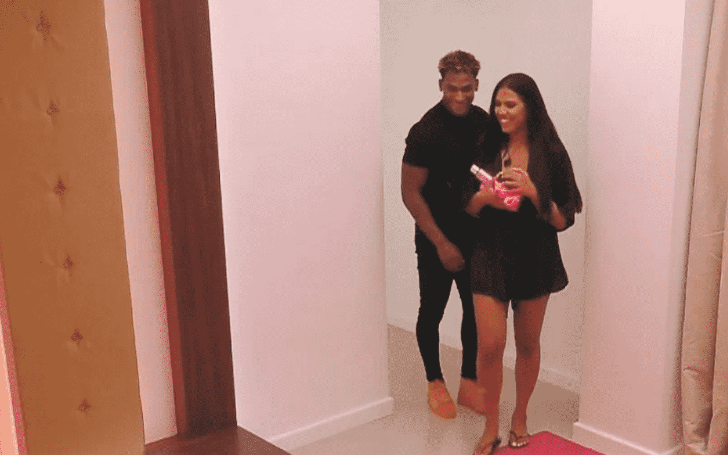 Anna Vakili and Jordan Hames head inside the hut where Hames blindfolds the model, then the fun begins as the 23-year-old starts to tickle Anna seductively. And then the striptease begins!

Anna Vakili sure looked excited to spend the night in the Beach Hut with her man, while Jordan Hames was busy hatching a sexy plan.

Talking with his friends, Jordan asks for the suggestions to which Michael Griffiths suggests Hames should surprise Vakili with a dance that eventually turned into a sexy striptease.

As the couple was excited for the night out in hideaway by their fellow Islanders, Anna freed herself of all restrictions as the couple arrived in the Hideaway, followed by Anna and Hames kicking things off with a steamy session in the hot tub together.

After the hot tub bath, the couple heads inside the hut where Hames blindfolds the model, then the fun begins as the 23-year-old starts to tickle Anna seductively. And then the striptease begins!

We can see this was probably something new for the couple as not soon enough, they burst into laughter when Hames started his striptease.

The next morning was fun when Anna opened about the other night, and spoke about their time alone in the hut.

Read Also: Who Is Anton Danyluk? Get All The Details Of This Scottish Love Island Contestant!

Anna said, "It was everything in one. It was romantic. It was funny. It was sexy. I wouldn't mind having every night in the Hideaway!

The sexy night arrived after Amber Rose had row with the girls over the way they reacted to Michael.

To which, Ovie replied, "You need to see who's for you and who's not for you."

Things certainly were not great the night before the 'Sexy' striptease, however, Anna and Jordan are happy to have gotten the chance to spend time alone with each other.