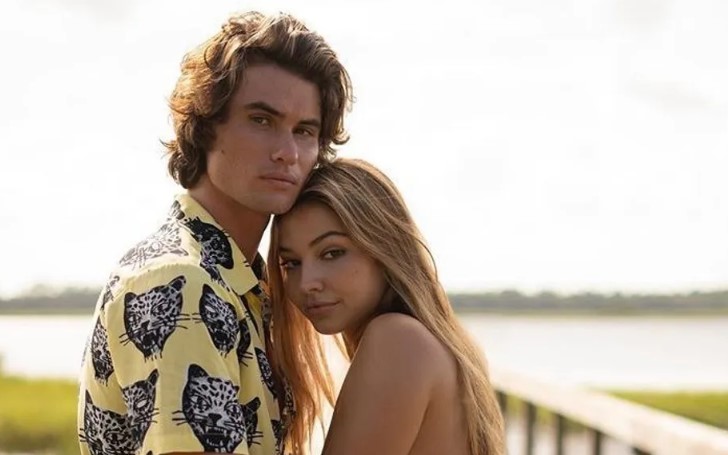 Chase Stokes and Madelyn Cline made their relationship Instagram official.

Stars of Netflix' series, 'Outer Banks,' Madelyn Cline, and Chase Stokes are on-screen love interests. However, the on-screen couple took it a step further and decided to be a real-life couple.

The couple confirmed their relationship on Sunday, June 14, 2020. Chase Stoke taking to his Instagram account, confirmed he is dating his co-star and on-screen girlfriend, Madelyn Cline.

Chase, 27, on his Instagram, shared a series of two pictures where the couple is seen having a beach date as in one of the photographs, Cline, 22, is seen holding a bottle of wine.

The star who plays the role of John B. wrote, "cats outta the bag," on the captioned on his post. While Cline replied on the comment section saying, "I have fallen, and I can't get up."

In one photo, Chase showed only the bottom portion of their legs on a red and white blanket with containers of half-eaten take out food.
Photo Source: Chase Stokes' Instagram

It certainly looked a romantic day, and time as well. The couple is having a beach date, while the yellow light during sunset hits their skin. Everything seemed like a dreamy set; it was nothing less than a romantic movie.

Well, the on-and-off screen couple seems to enjoy each other company a lot. We couldn't be happier for them, and indeed, they look perfect together.

You May Also Like: The Confusing Multiple Timelines Removed from 'The Witcher' Season 2, "A Controversial Aspect"

Does Netflix Brag Too Much About Its Number of Viewers?

The Streaming Scandals Continue: Netflix Is In Big Trouble Because Of Its Original Movies

While Netflix is Raising its Prices Hulu Drops Its Price to $5.99 a Month