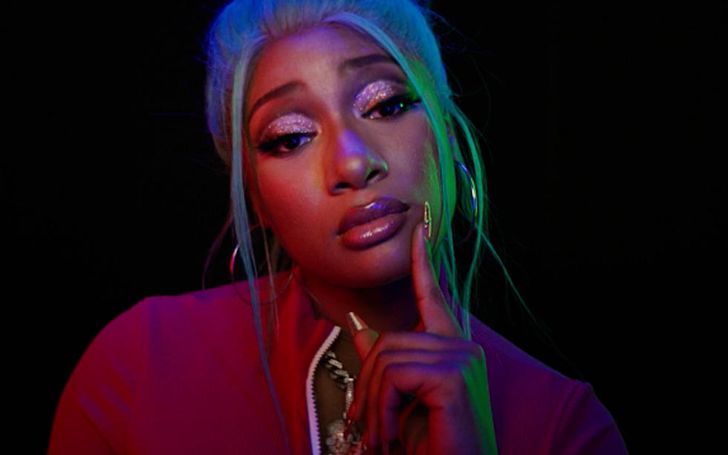 Find out the staggering Net Worth details of female hip-hop sensation Megan The Stallion.

Megan Jovon Ruth Pete, professionally known as 'Megan The Stallion,' is an American rapper, singer, actress, and songwriter who's been a source of inspiration to thousands of her female followers.

Since Stallion,24, never misses to mesmerize us through her enthralling music, here we are focusing on how much fortune the 24 years old rapper hustled in her inclining music career.

Megan Thee Stallion Net Worth is Around $3 Million

Megan released her first mixtape called 'Rich Ratchet' in 2016. The mixtape amassed quite good attention on the media, and later she got a breakthrough from her first single "Like a Stallion" on April 10, 2016.

The 2019 B.E.T. Hip Hop Award for Best Mixtape recipient then signed with one of the certified Entertainment labels in Houston. As reports by Music Industry How To, the record label will invest around $5000,000 to $2,00,000 to the newly signed artist.

Check Out: What Is Shania Twain' Net Worth? Grab All The Details Of Her Sources Of Income And Earnings!

But we assume the 'Cash Shit' hitmaker earned around those digits combing her two record deals as shortly in November of that year she signed with 300 Entertainment. In fact, Stallion was the first rapper to be signed by the label.

The rising artist had a international breakout after she released the big single hit "Big Ole Freak" from her EP Tina Snow. The song buzzed her first entry on the Billboard Hot 100 and peaked at the number 26 on the list.

Flaunting her musical magic, Megan's made another breakthrough from "Hot Girl Summer," which turned out to be an anthem for many girls. As an aftermath of her superhit songs, Pete was offered to sign a major management deal with Roc Nation owned by Jay Z.

To date, she has worked with some of the celebrities stars like Nicki Minaj, Chance the Rapper, Ty Dolla Sign, and Quavo.

You May Like: Ed Sheeran Gave Multiple Hit Albums; How Much is his Net Worth? His Cars, House, and Lifestyle

Megan's recent 2020 release is B.I.T.C.H. - reported to be a diss track to former partner Moneybagg, which is one of the tracks from her upcoming studio album Suga.

"B.I.T.C.H." follows the release of "Diamonds," Megan's collaboration with Normani, which will appear on the upcoming soundtrack Birds of Prey: the Album, which is adding a good 'greens' to her bank account.

Stallion Career started to take off in 2019.
SOURCE: Just Jared

As Megan is graveling her career in the music industry, the artist is recently starting to make some hunnid bands.

To date, Stallion has endorsement deals with some of the leading brands such as Puma and Coach, which are major sources for boosting up her net worth.

The beauty with good soul is also noted for charity work as she donated a heavy surplus to the food banks in the Houston area. She even bought her granny a lavish truck.

Stallion is famous all over the internet, with a huge fan base of 8.6 million followers. Besides, she has 7 million monthly listeners on Spotify.

So Megan is going good in terms of money and she's earning well. To windup Stallion is living the life filled with riches and luxury.

Don't Miss: Nicki Minaj Net Worth is Reported $85 Million, Detail About Her Career and Income Source

We hope you enjoyed the article, for more Entertainment updates, visit Glamour Fame.