home Entertainment Muse Frontman Matt Bellamy And Model Elle Evans Are Officially Married; Grab All The Details Of Their Wedding!

Muse Frontman Matt Bellamy And Model Elle Evans Are Officially Married; Grab All The Details Of Their Wedding! 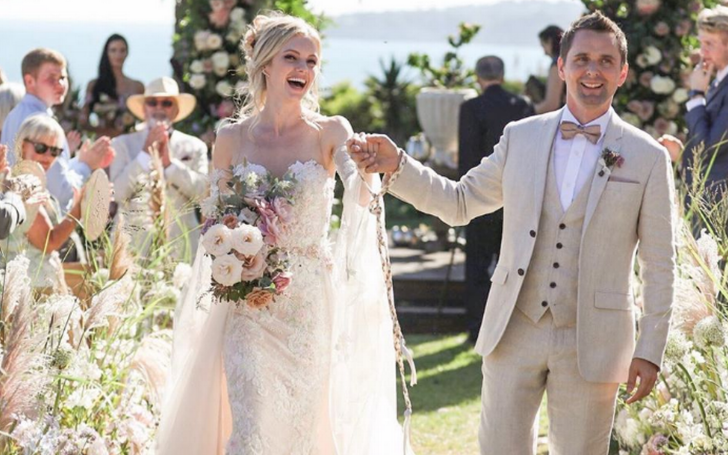 Muse band frontman Matt Bellamy tied the knot with his model fiancee Elle Evans on Saturday, after a year and a half since they got engaged in December 2017.

The newlyweds' couple announced their wedding news exclusively taking to their Instagram on Sunday, August 11.

The gorgeous bride showed up in a heavenly look while walking down the aisle wearing a custom gown designed by Martina Liana Bridal Designs dress.

Much like the top designer Jenny Packham's bridal dress, the light pink dress featured sheath designs with a long tail. The model went for a natural makeup rather than dark ones which were entirely giving her matching looks with the dress.

The Love Witch star didn't wear any flower crown for the groom as she simply made a bun on the back and slipped the front part on the side.

On the opposite, the groom opted for a vanilla color suit with a matching bow tie and show.

The dress added charm to the Uprising hitmaker gentleman looks. The inner white shirt outside his waistcoat perfectly matched the entire outfit.

After few years of dating, the lovey-dovey decided to turn their relationship into the next step. They got engaged back in December 2017 a few days later the actress birthday.

Evans took to the jolly news and shared it among her 87k fans taking to her Instagram on December 24, 2017.

Evans, 29, announced the news writing with a captivating caption which reads,

Was going to surprise everyone on Christmas, but just can’t wait any longer…. We are so happy to announce to the world that we are engaged.

Just a few days after my birthday, on the most romantic holiday of our lives, the man of my dreams asked me to marry him! After tears of joy, gasps of shock, and a split second of disbelief, of course – I said YES!

Jenelle concluded the post writing, “I can’t imagine our lives apart,”  “What I can imagine is a bright future full of love & light, family & friends, moments that turn into cherished memories, and a lifetime of pure bliss.”

Kate and Matt still meets each other occasionally and gets along for their child.

Nevertheless, Matt, Elle and Kate, 40, shares an excellent mutual relationship as both the partner never brags things from their past with the present and adores Bingham as her child.

We surely hope the relation lasts longer and doesn't fall apart like Miley Cyrus and Liam Hemsworth who recently split in less than a year.

Carrying positive vibes and blessings, we would like to congratulate both the partner for the start of a new phase in life. May their relation always sparkle with immense love, bond, and care.