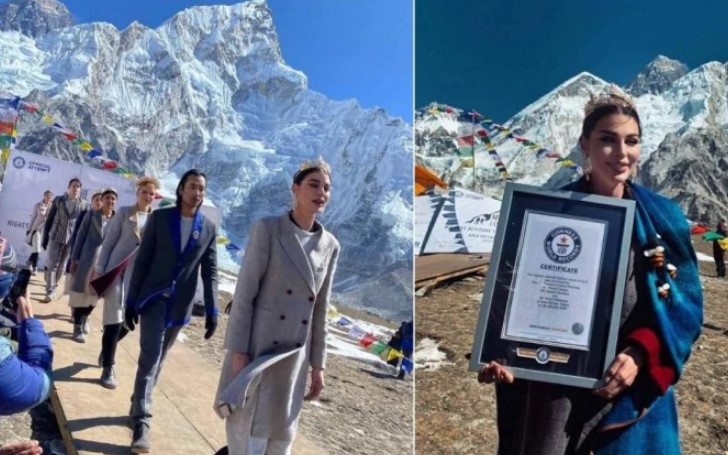 Nepal set the Guinness World Record for hosting a fashion show with the name -'The Mount Everest Runway,' on the highest altitude on January 26, 2020.

Nepal, a country of mountains, recently set a Guinness World Record for hosting a highest altitude fashion show on January 26, 2020. The show with the name 'The Mount Everest Fashion Runway' was organized by RB Diamonds and KASA Style in support of the Nepal Tourism Board.

Nepal, one of the countries in South-East Asia, is known for its unique diversity of land and is home to the world's tallest mountain - Mount Everest (Sagarmatha). The landlocked country, which is hosting its Tourism Year by the campaign name - Visit Nepal 2020, has managed to gather massive attention from the world after setting the record.

Here's some interesting facts to know about the fashion show, and the record, the country recently set.

The Fashion Show - 'The Mount Everest Runway' was organized by a few big names on the Nepalese industries like RB Diamonds and KASA Style, along with the support of the Nepal Tourism Board. To set the record of the highest altitude fashion show on land, the organizers chose Everest Base Camp.

Also See: 7 Fashion Trends You Should Definitely Check Out for Spring 2020

Everest Base Camp, otherwise known as Kalapathar, a UNESCO world heritage site, sits at the height of 5340 meters, which approximately translates to 17515 feet or roughly 3.31 miles. So, you can pretty much imagine the altitude.

The Purpose of The Mount Everest Runway Fashion Show

The Mount Everest Runway was hosted at the height of 5340 meters above sea level.
Source: Nepal Tourism Board Twitter

The main motive of the event was to raise awareness about climate change, along with the agenda to promote sustainable fashion worldwide. And for the apparent reason, it was to promote the nation as well.

The campaign, as we mentioned earlier, is also for the promotion of campaign 'Visit Nepal 2020' where the landlocked country is planning to welcome more than two million tourists from around the world. Certainly, the event will prove fruitful for the campaign.

Who were Parts of the Mount Everest Runway?

To grace the event, models from different parts of the world like Finland, Italy, and Singapore participated, including Miss Universe Sri Lanka 2018, Ornella Mariam Jayasiri Gunesekere. The 12-year-old student from Nagaland, Akivito Sema, was the showstopper of the fashion show, according to sources obtained.

You May Also Like: These 5 Best Selling Choices Could Be The Perfect Bra You Need!

Moreover, the show was also attended by Honorable Secretary of the Ministry of Culture, Tourism and Civil Aviation, Kedar Bahadur Adhikari, and senior director of Nepal Tourism Board, Nandini Lahe Thapa, along with other dignitaries. Thapa, along with Aashmi Rana and pilot Lt. Col Pratap Bohara, acted as the official adjudicator of Guinness World Records.

Official Statement by the Nepal Tourism Board

Miss Universe Sri Lanka 2018 participated in 'The Mount Everest Runway' to be the part of extraordinary events in the history. While Akivito Sema from Nagaland was the showstopper of the fashion show.
Source: Nepal Tourism Board Twitter

On Wednesday, January 29, 2020, Nepal Tourism Board issued a press release to address the event. The official statement read, "The designs, patterns, and the materials used during the Fashion show were all-natural, organic, and all Nepali product line from KASA. The clothing line was made of Nepali Pashmina, Felt, and Yak Wool, ideal for winter wear."

For more information on your favorite celebrities' lifestyle, Fashion News, and other entertainment sources, stay tuned to Glamour Fame and don't forget to sign up for the newsletter.