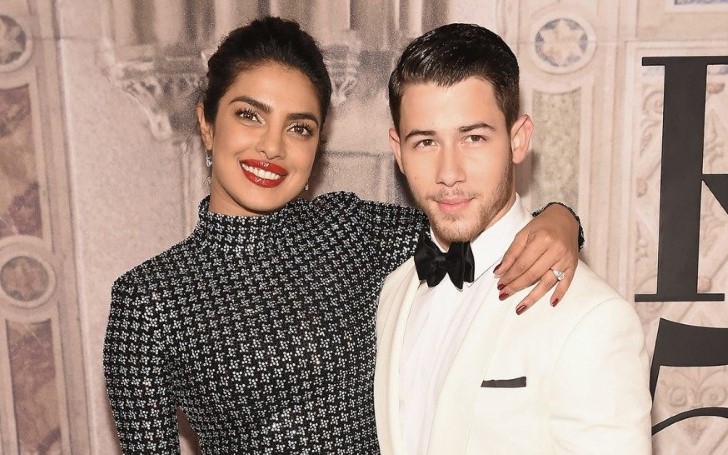 The stars, Priyanka Chopra and Nick Jonas tied the knot in two different ceremonies, Indian as well as Christian, after dating for seven months. They confirmed their husband and wife status with photos.

In the first place, they tied the knot wearing Ralph Lauren. The bride was dressed in a lace, high neck gown with sheer sleeve and button up on the front. According to some sources, it took almost 1826 hours to complete the dress.

The dress beneath the embroidered outer layer contained 2,380,000 mothers of pearl sequins. The look was accessorized with custom Jimmy Choo shoes.

📸: With these Pictures we have witnessed Love ❤ pic.twitter.com/DRmHduB4BK

The showstopper was her 75 feet long veil which had to be held by multiple guests when she walked down with her mom.

THE QUEEN HAS THE LONGEST VEIL AND THAT’s HOW IT SHOULD BE😍 @priyankachopra #NickYankaKiShaadi pic.twitter.com/3gL4xNtbZ4

It was not just a wedding dress but also contained a number of sentimental tributes. She hid some secret message on her dress including her husband's name, their marriage date, and her parent's name.

Similarly, the gown also consists of a piece of her mother-in-law's wedding dress.

In an interview, Priyanka explained about her dress,

''When we went in for the sketch presentation, they created exactly what I envisioned for myself on my wedding day… and I said, ‘Yes’ to the dress.''

Meanwhile, Nick, the groom wore a Ralph Lauren Purple Label double-breasted black tuxedo with a custom patent shoes. A small piece from Chopra's dress was sewn into his tuxedo with the words, ''My Jaan,'' Urdu for ''My Life.''

While Priyanka entered with her mom, Nick sheds a tear. Isn't that sweet?

#NickJonas wipes away a tear when he sees #PriyankaChopra walk down the aisle during one of their beautiful ceremonies. Tap the link in our bio to watch the full special on @peopletv. ❤️ | 📷: (c) Purple Pebble America, LLC and NJJ Entertainment, LLC 2018. Wedding footage by @CalebJordanLee of East West

Regarding the Hindu ceremony, they married at the five-star Taj Umaid Bhawan Palace in Jodhpur. The bride wore Sabyasachi Mukherji's collection. She wore a deep red lehenga-choli (an outfit with a skirt and a contradicting top).

A post shared by Sabyasachi Mukherjee (@sabyasachiofficial) on Dec 4, 2018 at 3:51am PST

The dress was embroidered and was teamed up with the fine jewels with sequin work. The star explained about her dress,

''For the Indian wedding, I wore Sabyasachi. I always knew I wanted a red traditional silhouette for my wedding but Sabya brought in incredible French embroidery to mix and with incredible jewelry and western inspired veil it was just such an amalgamation of who I am!''

The jewelry she wore was traditional. His neckpiece came from the ''Haute Joaillerie Collection'' by Chopard which featured 184.50 carats of pear-shaped diamonds set in 18k ethical white gold.

Here are some of their pre-wedding pictures. Check it out:

One of the most special things that our relationship has given us is a merging of families who love and respect each other's faiths and cultures. And so planning our wedding with an amalgamation of both was so so amazing. An important part of the pre wedding rituals for the girl in an Indian wedding is the Mehendi. Once again we made it our own and it was an afternoon that kicked off the celebrations in the way we both dreamed. @nickjonas

It all began as a fierce song & dance competition between the families but ended, as always, as a huge celebration of love.  Nick and I were looking forward to the Sangeet (musical evening), another pre wedding ritual.. and to see what each side had put together. And what a performance it was. Each family telling our stories through song and dance, filled with lots of laughter and love. We were both filled with gratitude for the effort, the love and the laughter and will carry the memories of this special evening for the rest of our lives. It is an amazing start to a lifetime of togetherness for our families and friends...#grateful @nickjonas 📹/📷: @calebjordanlee @josevilla @josephradhik

Earlier, Priyanka Chopra and Nick Jonas were subject of controversies as their profile got taken down by New York Magazine.