Saturday Night Live: Pete Davidson Opens Up About Living With His Mom 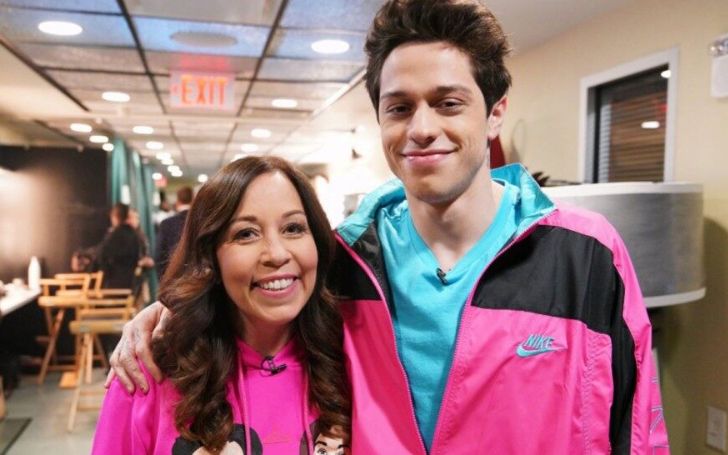 Pete Davidson opens up about living with his mom during 'Saturday Night Live's Mother's Day episode.

The Saturday Night Live star Pete Davidson brought his mother Amy Davidson into his "Weekend Update" routine, calling her "the greatest roommate in the world."

Sitting down for another insightful "Weekend Update" segment on Saturday Night Live on May 11, the comedian opened up about why this Mother's Day is extra special.

"This year, she's not just my mom, she's also my roommate."

The comedian recently revealed he's been living with his mother in a $1.3 million house in Staten Island, N.Y., which he brought for his mother, following his high-profile breakup with Ariana Grande and then Kate Beckinsale several months later.

"I know what people think. They see you on TV and magazines and stuff and they think, 'That guy must have a place.' Nope."

When "Weekend Update" co-anchor Colin Jost suggested many actors, when they make it big, buy a house for their parents, but Davidson shot that idea down hard and went ahead to say, "Yeah, I'm not gonna do that. If I buy a house, I'm gonna live there."

Read More: Pete Davidson Reportedly Had a Heckler Thrown Out of his New Jersey Comedy Show For Joking about Mac Miller's Death

While the comedian claims living with his mom hasn't been a bad experience at all, it definitely has led to some awkward situations.

Later, appraising his mom for her patience and love, the comedian brought his mom out onto the stage to join him for the segment.

When questioned what they planned for Mother's Day, Davidson joked, "What do you mean? I put her on TV. This is it. I mean, you don't know. Jon Hamm could be single and watching."

To which his mom joked, "I'd also settle for James Spader."

"You'd settle for a Ninja Turtle. I just need a dad," Davidson shot back with a laugh.

After the end of the episode, SNL shared a photo to Twitter, in which Pete's mom posed with Hamm backstage.

Last month, Davidson appeared in The Tonight Show Starring Jimmy Fallon where he opened up about his recent living situation.