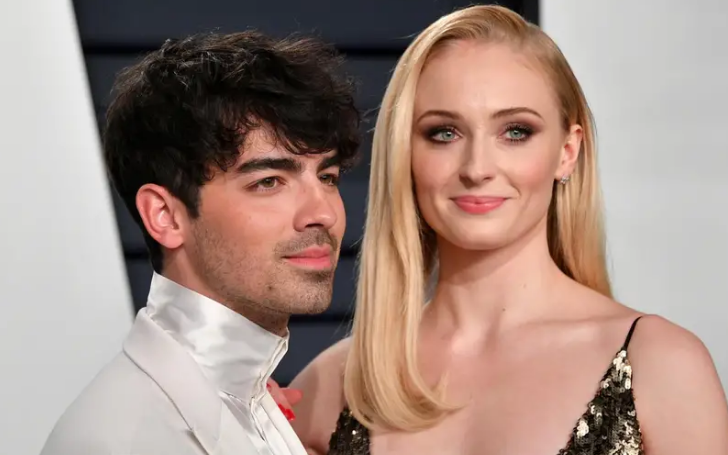 Sophie Turner and Joe Jonas shared the pictures on their official Instagram page on Thursday and captioned it "Mr. and Mrs. Jonas".

Sophie Turner and Joe Jonas shared the first official pictures of their second wedding on Thursday as the couple was married in surprise first time in Las Vegas in May.

Corbin Gurkin, a well-known wedding photographer was the official photographer for the night. He captured the couple walking down the aisle and taking their vows perfectly.

Both, Sophie Turner and Joe Jonas shared the pictures on their official Instagram page on Thursday and captioned it "Mr. and Mrs. Jonas".

In the picture, the Game of Thrones actress could be seen wearing a floor-length, embellished white dress by Louis Vuitton.

While Joe could be seen wearing an all-black suit with a striped shirt by French fashion house Belruti.

Read Also: What Is Alex Morgan' Net Worth? Details Of Her Sources Of Income And Earnings!

The couple chose Château du Martinay in Carpentras, South France for their wedding. The location is a historic estate which was built in the 18th century and was rebuilt in the 19th as it was burnt down during the French Revolution in 1799.

The wedding was filled will A-list celebrities, but those who could not attend the ceremony congratulated the couple on their Instagram page.

“Sophie Sophie… more than I can take, So beautiful, what a woman. Happy happy days to you both.” Sophie's Game of Thrones co-star, Lena Headey, commented.

Recommended: Jenelle Evans Cries 'Tears of Joy' As She Regains Custody of her Children

The newly-wed couple celebrated their second wedding in France over the weekend.