Sophie Turner And Joe Jonas Shared A Romantic Kiss In Paris Ahead Of Second Wedding!

We love how Sophie Turner and her husband Joe Jonas are going stronger than ever.

Singer Joe Jonas married the love of her life aka Sophie Turner last month after attending the BillBoards Music Awards in a surprise wedding ceremony in Vegas.

Prior to their first Vegas wedding, the couple previously let their fans know that they planned to get married in the city of Love, Paris. 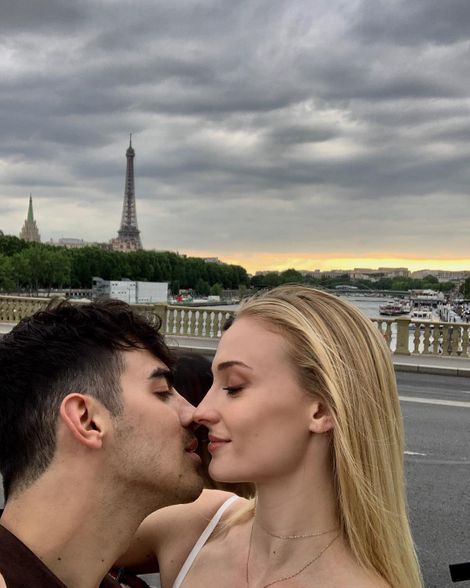 And to pump up our hormone, the couple is currently in France. Could they be finally ready to tie the knot for the second time?

Whilst it's not certain, but we're glad for the adorable PDA snap Mr. and Mrs. Jonas took to Instagram to share for their followers.

The 'Game of Thrones' actress and her hubby looks all affectionate as they lean closer to take a selfie.

As if the picture wasn't romantic enough, the pair took the picture at golden hour as a glimpse of the sunset and Eiffel Tower is seen in the background.

Turner who portrayed Sansa Stark in the hit HBO series simply wrote: "🇫🇷 me" followed by a smirking emoji in the caption section.

As for Joe, the proud husband and the biggest fan of Sophie Turner shared the same image with the same content in the caption section.

The adorable picture earned the attention of sister in law, Priyanka Chopra who gushed in the comment section with a couple of heart eyes and fire emoji.

Premiere Carpet Pro-Tip #1: Always make sure you get the shot 📸 #ChasingHappiness @sophiet

Meanwhile, the speculation of Jonas and Turner getting married anytime soon in France only keeps blowing up more.

As a news outlet reports that the couple only tied the knot in Vegas to make their relationship official and legal so it would be easier for them to have their traditional wedding dream in Europe.

The 'Sucker' singer, in fact, recently informed on James Corden's host show; The Late Late Show With James Cordon that the two intend to get married over the summer.

Besides, the Jonas Brothers singer also had a Bachelor party in Ibiza just past month with her friends and family including brothers Nick Jonas and Kevin Jonas.

Unfortunately for the fans, Joe and Sophie are reported to keep their second wedding highkey lowkey as possible.