home Entertainment How Many Tattoos Does Nipsey Hussle Have? Learn Their Meanings Here!

How Many Tattoos Does Nipsey Hussle Have? Learn Their Meanings Here! 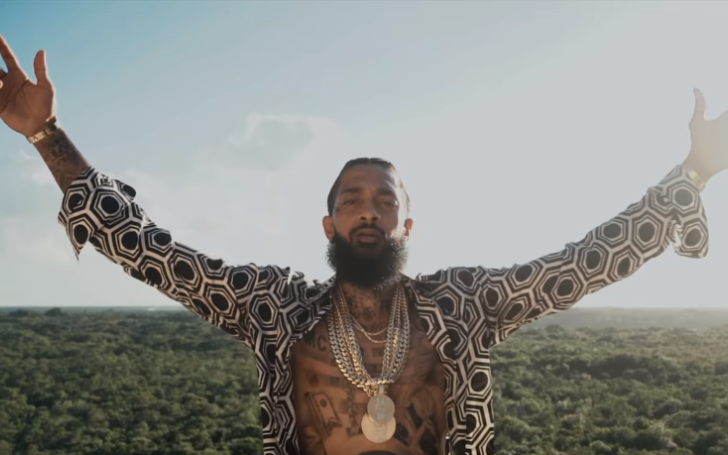 There's a saying the only thing you take to your grave is the tattoo you have inked, and Nipsey surely took a lot of memories with him.

The beloved hip hop sensation Nipsey Hussle tragically passed away after being gunned down in front of his clothing store in Los Angeles on March 31.

But in today's article, we are not going to surround ourselves with melancholy but talk about some of the fascinating tattoos our beloved artist inked.

'Double Up' hitmaker has more than 40 tattoos all over his body. In this section, we're going to explore some of the best Hussle's tattoos.

Among all, Nipsey's neck tattoo is one of the famous in line. The most popular and fascinating tattoos of the artist among all. Nipsey's race flag tattoo and a crown above is one of the prolific ones.

On the side of his right eye, Nipsey has inked with two tattoos with "Prolific" and "Goof Will Rise" written on it.
SOURCE: Body Art Guru

Another Nipsey's fascinating tattoo is his right ear ink, which reads "H60DSTA," a slang hood call by which crips call each other.

You May Like: Franka Potente Tattoos - Everything You Need To Know Here!

Below his ears 'Racks In The Middle' hitmaker has inked a beautiful art piece of 'The World Is Mine' with picture of a globe on the side.

Behind every tattoo, there unfolds a story, and so does Nipsey's tattoos. The late rapper loved to ink some of his close things forever.

'Slauson Boy', the tattoo Nipsey has inked on his back holds a precious meaning as it's the first mixtape by the American rapper.

You May Like: David Bromstad Tattoos - Learn Their Meanings >>>

Nipsey's also inked the last names of his near and dear ones.
SOURCE: Rap-Up

Some of the names Nipsey has written are Blacc Samm, G Bob, Hoodsta, Shady and so forth.

Nipsey had inked faces of his son (Kross Asghedom) and daughter (Emani Asghedom) on the left and right side of the chest.

Find Out: Conspiracy Theorists Claim Tupac Shakur Is 'Alive' and They Have Pictures To Prove It !!!

Coming through, on his beauty bone line, the rapper has tattooed a round chain with TMC (The Marathon Clothing) written on the left side, which, in fact, is sketched after his clothing store line.

'All Money' In Sleeve tattoo

Nipsey tattooed his record label logo (All Money In) along on his left forearm. Alongside his arm tattoo, he has also sketched a beautiful line that says 'God Got Me.'

Between their parenthesis, there is also a tattoo of an angle in between.

One of the iconic hip hop stars Rick Ross inked Nipsey Hussle's tattoo as a tribute to the late rapper.

Besides, many fans also pictured the late rapper tattoo while some copied his ink. Nipsey might have left us all, but his memory will forever be with us. R.I.P.

Recommended: Obsessed With Tattoo? Check Out These 10 Weirdest Tattoos That Will Make You Think Again >>>

We hope you enjoyed the article; Stay tuned and connected to find updates of the recent Entertainment articles only on Glamour Fame.