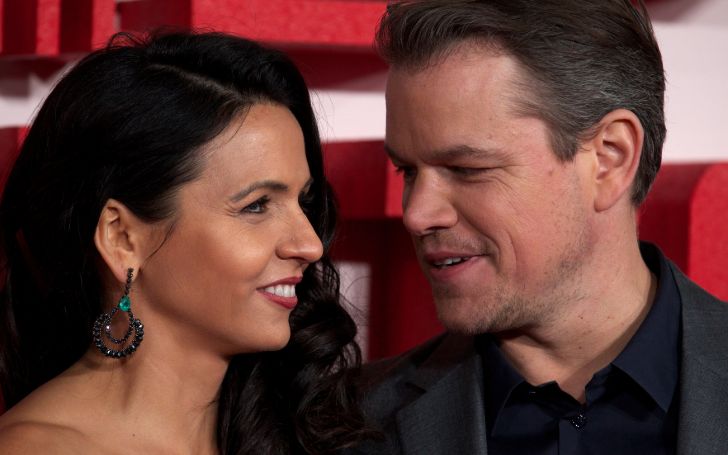 Luciana Barroso is the wife of the highly acclaimed actor, Matt Damon, who hails from Argentina but only a few know about her as she keeps her life pretty low-profile.

The pair, who are believed to have met when Damon was in Miami for his movie 'Stuck on You' is married for over a decade, and still only a few know about their relationship.

The couple met when Matt went out for a drink at a local bar, where Barroso was working the shift on the same bar. The actor saw Luciana across a crowded room, and the rest is just history.

Well, there's a more interesting fact about this Argentine beauty, so without any further ado, let's dive into the facts.

Luciana was previously married to a man named Arbello 'Arby' Barroso before she met Matt. Luciana shares a daughter named Alexa (1998) with her ex-husband, Arbello, before calling it a quit in 2004.

Also See: Actor and Producer Matt Damon Enjoys A Lavish Lifestyle with Wife and Kids; What Is The Figure of Matt Damon Net Worth?

Luciana's ex-husband still maintains a pretty good relationship with her and Matt Damon; the ex-husband said people have always try to hunt him down for a story about Luciana and his relationship but he just simply ignore them.

4. Fate played a role for Luciana Barroso and Matt Damon

As we all know, Luciana Barroso and Matt, who is currently working with Ben Affleck and Ridley Scott in an upcoming project, met at a bar, but that's a total play of fate how the couple met. According to some the sources, the movie, Stuck on You, was originally supposed to be shot in Hawaii when Damon signed the film in 2003, instead, the movie was shot in Miami.

What more surprising is, the actor did not want to go out, but his crew dragged him into joining them for a drink. Matt said, "I literally saw her across a crowded room, literally. I don’t know how else our paths would’ve crossed if that didn’t happen. If all those things didn’t happen.” For sure, its a love by chance!

And what's more, she was a bartender. So there you go, Matt proved it that love never sees status or class.

3. Luciana Barroso is Argentinian but is versatile with Italian culture

Luciana Barroso is originally from Argentina as she was born and raised there, but shortly after her birth, Luciana's parents' divorced. Following the divorce, Barroso was left to the care of her grandparents, who were Italians.

As her Italian grandparents raised Luciana, she adopted the cultures and etiquettes of Italians.

2. Luciana Barrosa has an Art Degree

Though you won't find relevant information when it comes to Luciana Barroso's education, one of the sources said Barroso bagged an arts degree from a local college. Shortly after the graduation, Luciana worked as an air hostess.

But Barroso resigned from her job soon enough, what exactly happened no one knows but some sources claimed she wanted to devote more time to her family.

1. Luciana Barrosa and Matt Damon had a low-key Marriage

Despite the fact that Matt Damon has a staggering net worth of $160 million, the actor and his wife decided to have a rather simple marriage. The ceremony took place in New York’s City Hall, on which only a selective people were invited.

The couple, however, agreed on a more extravagant vow renewal, they had a $600,000 celebration in 2013 in Saint Lucia with all of their family and friends.