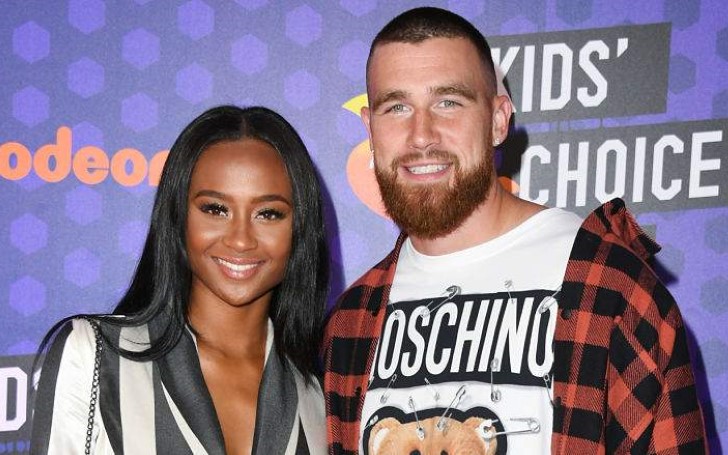 The American football star Travis Kelce is dating an internet personality for over two years.

Kelce and his girlfriend Kayla are public about their relationship. Particularly in the last few months both have openly posted photos on social media. Apparently, their pictures with each other are taking over the internet creating yet another 'couple goals'.

They first came into limelight last year when Kelce posted a photo with Kayla at his teammate Jeremy Maclin’s wedding on Instagram which got the internet buzzing in 2017.

Kayla is a huge supporter of her boyfriend, whom she calls her 'Best Friend'. She is on hand to support Travis at various other events throughout their relationship.

For instance, back in May, Kelce got introduced to his high school’s Hall of Fame. Kayla Nicole shared a photo from the event held at Cleveland Heights High School with a sweet caption.

"Just know, I woulda bagged you in high school, too! Congrats on being inducted into your alma maters’ Hall of Fame. Absolutely nothing makes me happier than seeing you shine. As usual, I am so so proud"

Later, in September, Kayla was on her man’s arm at the Walk the Walk Fashion Show started by Kelce himself, which is a nonprofit organization sponsored by Eighty-Seven & Running.

We make a living by what we get, but we make a LIFE by what we give. And a heart that truly gives, gathers! Proud of @87running & @killatrav! The Walk the Walk Fashion Show gets better and better every year. 💕 #WalktheWalk2018

Kelce too doesn't shy away from pampering his lady. Back in November Kelce took to social media to wish his leading lady a happy birthday.

My lil baby turned another year older this month! The future is gonna bring you so many amazing things, I can’t wait to see you blossom! And for the times life gets a little out of control just know I gotchu in my arms making sure you’re always good!!

Travis and Kayla are dating for more than two years. The couple spends as much time together as possible.

Discover: The Psychology of a Rapist; What Triggers The Behavior of a Serial Rapist?

With Travis calling Kansas City his home and Kayla residing in Los Angeles, it's not always as easy. Regardless of the distance, the two seem to really be in love and aren’t shy about showing it.