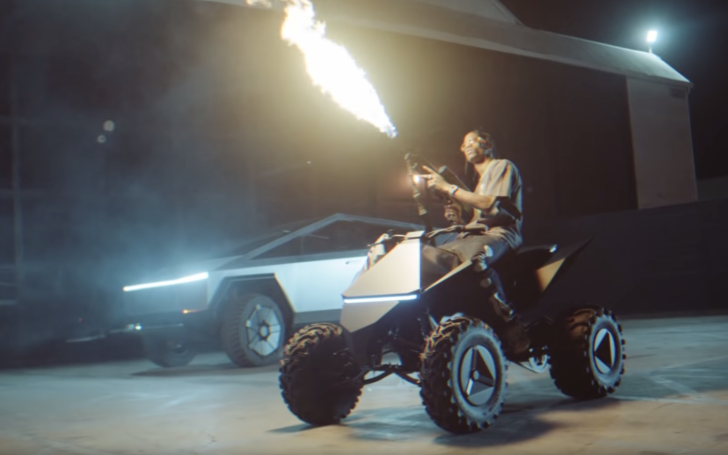 Jacques Berman Webster II, aka Travis Scott, is noted to be one of those rappers known for his unique concepts, either it be on his music videos or the tracks he makes, and this time it was revolutionary.

The creativity of Travis Scott, 27, is extensively seen in his latest album 'Astroworld' (2018), where he used some exceptional CGI concepts in music videos.

Some of the album's hits have taken the hip-hop world by storm, such as 'BUTTERFLY EFFECT' and the 'Billboard Music Award for Top Streaming Song' winner 'SICKO MODE' which gives us a freakish flavor of progressive hip-hop; switching two different beats between him and Drake, and then blending into one.

The artist, who never misses astonishing his fans, brought something new into his latest music video of his new song, 'GANG GANG' by featuring Tesla's revolutionary Cyber Truck.

You May Like: 'Look Mom I Can Fly' - Grab All The Details Of Travis Scott's Documentary On Netflix!!!

The music video articulates gangster hood vibe with cars and hustlers showing off the culture where Scott makes a cool entry alongside the Cyber Truck and rides an ATV.

The futuristic Cyber Truck, which is yet to launch, already received 146,000 orders in the market after its recent showcase in Los Angeles on Thursday, Nov 21.

The car shares materials and mechanisms used to built 'Rockets,' whose starting price ranges from $39,000.

The MV drops right after Travis released 'Highest in the Room', which is speculated to be a song written for his former partner Kylie Jenner after their split.

Don't Miss: Kylie Jenner Romantically Linked with Drake as They Were Seen Spending Time Together Following Her Split from Travis Scott >>>

For more Entertainment updates, stay tuned with us on Glamour Fame.