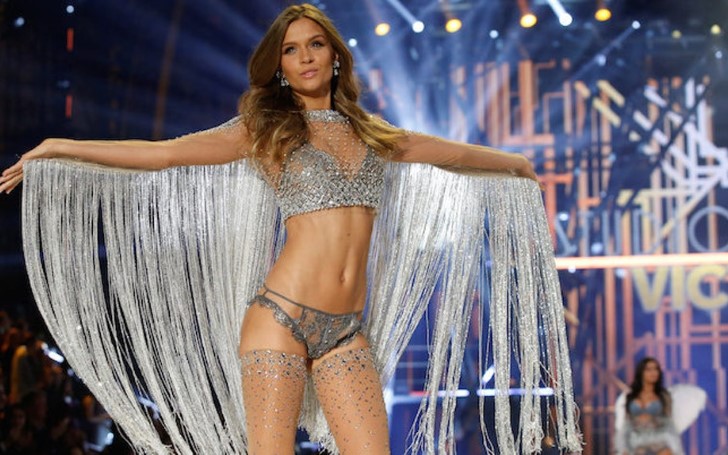 Josephine Skriver has taken her relationship with boyfriend Alex DeLeon to next level as the couple celebrated their engagement.

Victoria's Secret Angel Josephine Skriver enjoyed a very big month. As a matter of fact, she appeared for the third time in the Fashion Show in early November.

The model then wrote on Instagram that she was taking a "break from social media" in order to "sail the Norwegian waters in search for orcas and the northern lights!"

Also Read: Miley Cyrus and Liam Hemsworth Confirm Their Status As Husband and Wife; Details of Their Wedding

During her trip abroad, she and longtime boyfriend, Alex DeLeon, a musician, formerly of The Cab got engaged. Skriver displayed her excited as she captioned "I SAID HELL-FREAKIN’-YES!!!!"

I SAID HELL-FREAKIN’-YES!!!! I’M ENGAGED 😱😍😆😱 It was a cold November night. Alex had us driven all the way to Finland to see the northern lights. It was my second bucket list number i was checking off in the same week after swimming with Orcas, my favorite animals, in their natural habitat! Little did i know it would soon be my third! He had a bonfire built for me on top of the middle of a frozen lake deep in Scandinavia completed with the full moon shining on our backs and hot cocoa to keep us warm!?!? Like.. is he crazy?!??? For the first time in both of our lives we got to see the northern lights decide to show their dance across the starry night!! It was a full moon... it was on the 23rd (23 is my lucky number).. and the same day as his song “Aurora Borealis”, which was the first song he EVER wrote about me, came out to the world! sometimes the universe just chooses to leave you speechless!!! that was when @bohnes looked over at me. When he got down on one knee and asked me to be his forever.. I have never been more sure about anything in my life. You are my biggest adventure. My fairytale come true. My soulmate. My best friend. The love of my life. So of course it was 1millionxYES!!! Sometimes in life you will meet that one person that makes everything make sense. A person that pushes you to be an even greater version of yourself. A person that makes you not just dream it.. but believe it! Believe in your own abilities to make anything happen! Love is not about compromising yourself. Love is finding someone that only adds to your own joy and shine! Teammates for life!!! @bohnes with you i just knew! You are all that and more. You walked into my life and i have never looked back. I love you. You are MY northern lights and MY Aurora Borealis. <3 -Your Jo

It turns out DeLeon took Skriver up to Finland to see the northern lights, one of the items on her bucket list. The proposal took place on November 23rd, the anniversary of when DeLeon released his song "Aurora Borealis" which is another name for the northern lights.

You Might Also Like: Actor Kevin Spacey Charged For the Alleged Sexual Assault of a Teenage Boy

Interestingly, this was his first ever composition about Skriver while 23 is also the model's lucky number.

Also See: Nick Jonas is Named As The Most Stylish Man of 2018

Meanwhile, DeLeon posted a close-up of the ring on Skriver's finger with her smiling face on the background.

The couple is dating since 2013 and they share a home in Nashville. Moreover, they travel together to a lot of places, so it's not too far-fetched to imagine their wedding might take place in some far-off destination.