YouTuber Joe Weller's Body Transformation — He Tells All in a Video 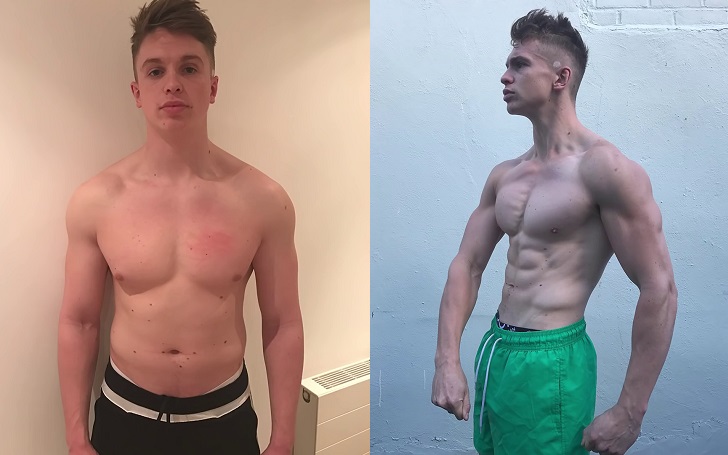 With over 5 million subscribers on YouTube, you could say Joe Weller has to maintain a certain body shape to keep the girls coming to his videos. Yeah, that's probably not why he transformed his body the way he's made it right now.

Weller is a 23-year-old YouTuber, but his contents say he's more than that. He's a musical artist as well, aside from vlogging. He's associate with other YouTubers like Elliot Crawford, Celestia Vega, and even had a boxing match with KSI. He's British, by the way.

'1 Year Body Transformation' is apparently a thing, and Weller became a part of it after being inspired by fellow YouTuber 'ChrisMD'. But there's more to the story for Weller than just one year of intense working out to achieve the type of body. It started when he was 10.

In a video from August 2019, he starts off by saying he was a chubby kid at first. At 11, he claims he was called 'Man Boob Weller'. Then at age 12, he was apparently kicked off the school soccer team for being "too fat". That was the moment he had this revelation.

In an effort to looked ripped (photoshopping a cutout of his head on John Cena's body), he went to the gym at age 14. Within two months, he turned skinny instead of developing any muscles. Turns out, he was too underdeveloped.

Of course, he was a little too ambitious at that age.
Source: Joe Weller, YouTube

Nonetheless, he continued working out. By 16, he developed some additional ripped-looking muscles. And by 17 or 18, he thought he was done with it. He thought he didn't need to do it anymore, that he'd reached his peak.

However, as he described, 'life happened'. He got busy with things. You know, the kind late teenagers are busy with: Living life, traveling to places, food to try and well, YouTube.

Calling himself "the king of being inconsistent", he shared he's done this Body Transformation thing multiple times. He then shared some before & after pictures of himself.

"This is How I do My Body Transformation"

He Considers 'Diet' the Most Important Thing

Weller's Body Transformation diet is a low carb one, with half of the nutrients supplying protein and even 40% of it being fat. In addition, he says he drinks lots and lots of water. The whole thing, he says, resulted in one cheat day a week for him. It means he eats his heart's desire at least one day in a week.

When considering a healthy diet, Weller suggests tracking the number of calories your body needs and burns in a day. For him, he found out his type of body burns 2000 calories of fat per day from just living. Eating less is a massive error, he says. Your body's not getting enough if you eat 1500 calories in a day (how he first started with).

In order to track his eating calculations, he uses the fitness app, 'MyFitnessPal'. But whatever fitness & diet plan you use, consistency is key. Don't judge any routine until you've tried it for 12 weeks straight.

Then, Building Muscle, "All about Trying to Trick Your Muscle into Not Knowing What's Coming"

Exercise is, of course, a pretty important part of burning those calories. For Weller, he says he threw out the idea of lifting heavy weights early on to show off and started off slow.

Mixing it up is important.
Source: Joe Weller, YouTube

Weller began with slow-controlled, high-rep (15-20), low weights cardio routine. He used to go to the gym three days a week because daily would be too much for him. Later, he suggests increasing the weights and introduce different styles, combining up different routines.

In the Course of Body Transformation, He Shared His Struggle with Depression

One of the main things he did to build up his body was getting off his depression medication. He discovered halfway through the body transformation year that his real medication was working out, exercising, and looking after himself. He claims it's made him much happier than he used to be.

The guy also went on to share his story of not achieving the goal he so wanted in boxing. He trained for seven months and didn't get what he was aiming for. He also shared the time he snapped his knee in the football pitch and how he was out from training and gym for the next year.

The boxing training was something that forbade him from running, so was his treatment for his knee obviously. But despite the setbacks, he says he found the things that really work for him. Yeah, football (the one with the foot) is also favorite for him.

It the end, he says being happy is important but admits he initially did this transformation thing to impress girls, which is not true for him. It's also important to have a friend to work out and do the jogging routines with you.

He concludes the video with, "The main reason why I do this is because I feel the best me when I'm in shape. And Yeah, it's nice to look good. So take a few pickings. Why not? Be proud of it, but don't let your mind just roll out for the vanity reasons."