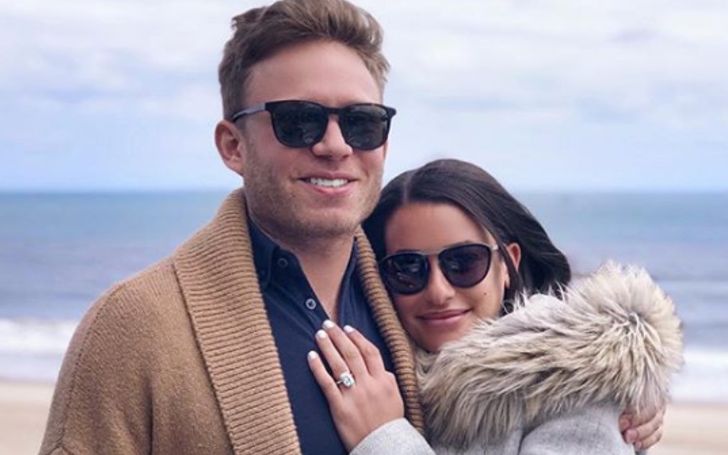 American actress, singer, and author Lea Michele and her beau entrepreneur Zandy Reich are expecting their first child together.

Born as Lea Michele Sarfati, on August 29, 1986, in the Bronx, New York, she grew up to be a renowned personality in the entertainment industry. Her husband, Zandy Reich, on the other hand, is a successful entrepreneur and business owner.

Michele and Reich look perfect together, and their relationship is acknowledged by many. So, if you want to about their beautiful relationship, keep on reading.

Both Zandy Reich and Lea Michele were open mind for a baby from the beginning, and after spending a year, as a married couple, they are about to welcome their first child.

Michele and Zandy are welcoming a newborn child together.
Photo Source: Instagram of the Lea Michele

According to Daily Mail, the actress declared her pregnancy news to the world with her social media post, where she uploaded a photo of her growing bump underneath a maxi dress. She made that announcement on May 2, 2020.

The Glee actress Michele hasn't been seen in media for several months and was out of the media radar. She kept a low profile before she shared her exciting news with her followers. So, the pair will be welcoming their newborn child soon, which will bring more joy in their life.

You Might Also Love To Know: Another Pregnancy Prank Or Is Danielle Cohn Really Pregnant?

Further, the love birds will also go through the parenthood experiences, which will be something to see, how they will keep up with their busy professional schedule, and their infant child.

The pair are enjoying a happily married life.
Photo Source: US Magazine

33-years-old celebrity Lea Michele tied her wedding knot with 37, Zandy Reich on March 9, 2019, in Napa, California. They had an intimate and romantic ceremony where around 200 family members and friends were invited, as per People.

Recommended: Tristin Mays Boyfriend - Is the Actress Dating Someone in 2020?

Before Michele and Reich took marital vows, they dated for two years. They had their first encounter through their familiar friend. Lea beau Zandy was the friend to her best pal Stephanie Levinson's husband, and through their connection, they get to know each other. After some time, the love birds began dating in 2017.

Subsequently, Michele and Reich shared rings on April 28, 2018, in the Hamptons. The gorgeous star announced their engagement and expressed her excitement to the world through her Instagram post.

Also See:Glee Star Sheds Light On The Reason The Show Will Never Return

However, painfully beautiful Michele was in a relationship some years ago before she and her soulmate Reich met each other. She was in love with her ex, Cory Monteith, who was also from the entertainment industry.

The Glee star Monteith and Michele were separated due to unfortunate incident.
Photo Source: Teen Vogue

The former couple was introduced to each other in the set of TV series Glee in 2008. They were the cast of that American musical-comedy drama. Several media reported Cory and Michele dating news in February 2012. The ex-pair remained in the relationship for a year. They were separated due to the unfortunate death of Monteith in July 2013.

To get updated with more celebrity-related content, feel free to visit Glamour Fame.