home Lifestyle Did Christina Aguilera Get Plastic Surgery — The Answer Is Here!

Did Christina Aguilera Get Plastic Surgery — The Answer Is Here! 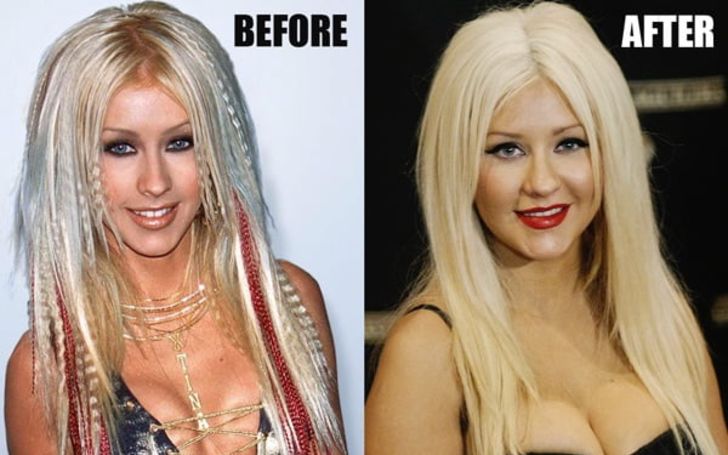 Christina Aguilera is the 'The Grammy' winning American singer famously known for the popular show 'The Voice'. She was an impressive coach for six of its seasons alongside hit singers Adam Levine and Blake Shelton.

Christina is an actress, songwriter and television personality who shot to fame decades ago and has barely changed over the years of her career. The artist is always seen flexing the most dramatic and over-the-top looks throughout her time which has left fans speculating about her beauty secrets for so long.

Is it that the diva simply doesn't age or is there some kind of sorcery involved? Ever wondered? Then hop on to find out more about the conventional artist's ever-glowing beauty and plastic surgery secrets.

Botox To Her Forehead And Around The Eyes

MYA Cosmetic Surgery's top surgeon theorized Christina went through anti-wrinkle injection also known as, Botox, on the areas of her forehead and around the eyes.

One of the earliest photos of Christina.
Source: Twitter

Botox is a nonsurgical plastic surgery treatment that cosmetically removes wrinkles giving the appearance of a smoother skin. It generally lasts 3-6 months and the wrinkle reappears after that. We can only guess the trouble of keeping up with botox treatments.

Jawline contouring is a treatment that uses non-permanent Dermal Filler to sculpt the jawline and add definition. It creates the look of a slimmer appearance, fueling more plastic surgery talks.

Christina Aguilera in 2008 vs 2018.
Source: LifeAndStyleMag

The treatment can also includes Cheek Enhancement and Chin Augmentation to help sculpt and define the side profile. When you look at the before and after pictures of the American beauty, you can't help but agree to the doctor's claims of her surgery.

The fuller lips of the musician have drawn multiple attention over the past years. She appears to have slightly fuller lips compared to her past pictures. Can't help but wonder, the natural beauty didn't really need cosmetic surgery transformations.

The fans quickly caught up to the change during the 2017 American Music Awards. The pop star took center stage to give tribute to the 25th anniversary of the iconic movie, 'The Bodyguard'.

There was a mutual love-hate review of her alleged plastic surgery transformation. One agitated fan wrote, "What the actual f**k did #ChristinaAguilera do to her face?!! She looks like a blow-up doll of Lindsay Lohan!." Whereas one fan said, "Please don't use lip fillers, they don't look good and you don't need it, babe."

You May Also Like: Christina Aguilera Weight Loss Story - Grab All the Details How She Lost 50 Pounds

The treatment would've probably cost around £200 - £500 per session to the actress. Regardless of the assumptions, Aguilera has never talked about getting plastic surgery she has, instead opened up about her changing looks over the years. The photos beg to differ.

Surgeries or not, The singer rocks her look.
Source: PageSix

Well, we understand how hard it can be to be in the industry for two decades and cope with the pressure. If Christina is happy with her looks, then why not?