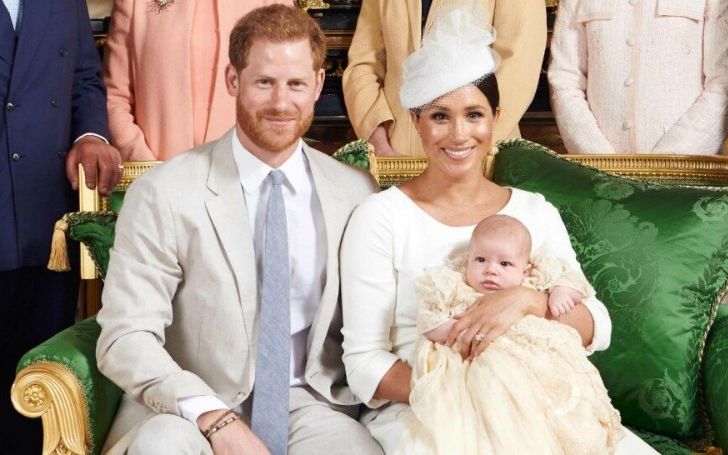 It was, the Duke and Duchess of Sussex said, a “special moment,” as their firstborn child (a son) was baptized in the close circle of his loving family. He was sprinkled with water from the River Jordan at a luxurious silver baptismal style that has been extensive in royal christenings for over 150 years.

As Prince Harry and Meghan Markle's first child showed his wide-awake face to the world for the first time, it seemed only right that Archie Mountbatten-Windsor’s first formal photograph esteemed not just those he will grow up with, but also the beloved grandmother he will never know.

Also Read: Meghan Markle Has Been Portrayed As A "Trailer Trash" American Who Threatens To Knife Kate Middleton In A New BBC Show

The attendance of Diana, Princess of Wales, was indisputable, with her two sisters set at the core of a traditional photograph arranged around the same suite of green chairs used in 1984 for images of Prince Harry and his mother.

The picture was one of two released by Buckingham Palace after Archie’s exclusive christening, the more formal of a couple which flawlessly typified the Sussexes intention to mix duty and modernity.

Recommended: Is Rose Hanbury More Popular Than Meghan Markle In the UK?

The second, a highly contrasting shot worthy of a fashion magazine, demonstrated the Duke and Duchess cuddling with their two-month-old son, gazing adoringly over Archie’s head as he sleeps.

The first color photograph of Archie since he was two days old seems to show him resemble his dad, with wisps of fair, reddish hair merely noticeable.

You May Also Like: Did Meghan Markle Upgrade Her Engagement Ring?

Staring to the one side of photographer Chris Allerton, the seventh-in-line to the throne is wide awake and quite mindful as he wears a replica of the christening outfit worn by individuals of the Royal Family since the times of Queen Victoria.

Archie, snuggled on his mother’s lap with his calmly-suited father next to them, is encompassed by members of the Royal Family: the Prince of Wales and Duchess of Cornwall, and the Duke and Duchess of Cambridge.  Doria Ragland, the Duchess’ mom, was the sole delegate of Archie’s maternal lineage, with the estranged Thomas Markle missing by and by.

In the middle of the image, behind the seats of Windsor Castle’s Green Drawing Room, are Lady Jane Fellowes and Lady Sarah McCorquodale: two of the three kin of the late Diana, Princess of Wales.

Lady Jane was one of the first guests to see baby Archie as an infant, and it is clear that their presence in the official photo underlines the Duke’s assurance to bring his son up encircled by the memory and ethics of his mother.

The Duke and Duchess have faced backlashes for not revealing the names of Archie's godparents, and being covert in giving the public a glimpse of the event — though that did not stop well-wishers coming to Windsor with Union Jack flags, banners, and even a cake to celebrate the occasion.