Erica Herman - Some Facts to Know About Tiger Wood's Girlfriend 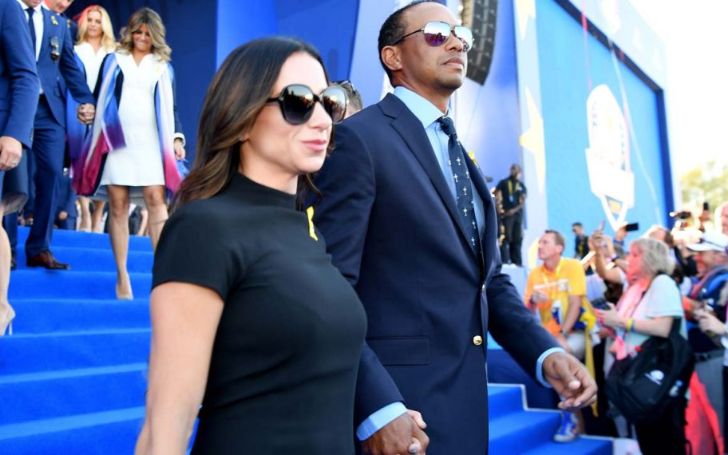 If you became close to celebrities, then suddenly everyone wants to know about you and your lifestyle. That is precisely what happened to Erica Herman; she became topic of many news from her relationship with the American professional golfer, Eldrick Tont Woods aka Tiger Woods.

Herman is the current girlfriend of the pro golf player Tiger who became lucky for the athlete dying career, as he began to improve his gameplay after being in relationship with the beauty, Erica. The pair appeared together in several events and viewers can feel positive vibes whenever they show up together.

Due to Herman uprising fame, people are searching a lot about her and wanted to know her a little better. As a result, today in this article, we brought you some exciting facts about Eric Herman, which will assist you guys in gaining interesting information about Tiger Woods new lover. Let us begin.

Erica Herman Worked as a Manager in Woods Restaurant

When we think about someone relationships situation, we always focus first, how they met for the first time. For Tiger Woods and Erica Herman, it was his restaurant, Jupiter where she works as a general manager.

Erica and Tiger had their first encounter in his restaurant.
Photo Source: Business Insider

Before Herman became a part of Tiger Florida restaurant, she used to be an employee of The Aura Bar and Restaurant. Therefore, Woods’ high-class sports bar, Jupiter became the hook for the love story of Erica and Tiger.

Erica Herman is a supportive partner for Tiger Woods; as we can see her by his side in every massive event, he is involved. Not only in good but Herman assist 44, Woods in his bad days too. One perfect example, she accompanied him to court when he got charged for reckless driving in May 2017.

Everything You Need To Know About Tiger Woods & Erica Herman's Relationship

Woods was under the influence of drugs and alcohol when he got arrested near his Jupiter Island, Florida home by the police. He fell asleep in his car while driving, which was stationary in a traffic lane with its engine running.

Later, the pro athlete pleaded guilty for his reckless act and received a year of probation. Further, he fined $250 and underwent 50 hours of community service along with regular drug test.

Erica Herman is a supportive girlfriend who stand with Woods in his every big moments.
Photo Source: Golf Channel

Subsequently the pair, Herman and Woods made their first official appearance in the mass in October 2017 during the Presidents Cup at Liberty National Golf Course in Jersey City, New Jersey. In the event, she wore a “player spouse” to reflect vibe around the mass that she and Woods are in a relationship.

Herman Boyfriend Woods is a Divorced Man and Had Extramarital Affairs

During 2010, Tiger was trying to handle so much pressure which occurred in his life. He was accused of extramarital affairs by several women, which caused misunderstanding between his then-wife, Elin Nordegren. The former pair got legally separated with divorce following the incident. Nevertheless, Nordegren is with former NFL star Jordan Cameron.

Recommended: Adele's Almost $200 Million Net Worth Might Change After The Divorce

Woods, with his ex-wife, gave birth to two beautiful children, Sam Alexis Woods and Charlie Axel Woods. So, if he ever walks in the martial aisle with his current lover, Erica Herman then she will be a mother of two from his previous relationship.

Focusing on the net worth the beauty Erica Herman, she accumulates a decent income of $500,000, as per TV Over Mind in 2018.

The lovebirds are living a luxurious life together.
Photo Source: The Sun

However, compared to the earnings of her beau Tiger Woods who has net assets of $800 million, according to Forbes, her earnings seems very low. Still, from Herman career field, she did manage to accumulate fine numbers in her bank.