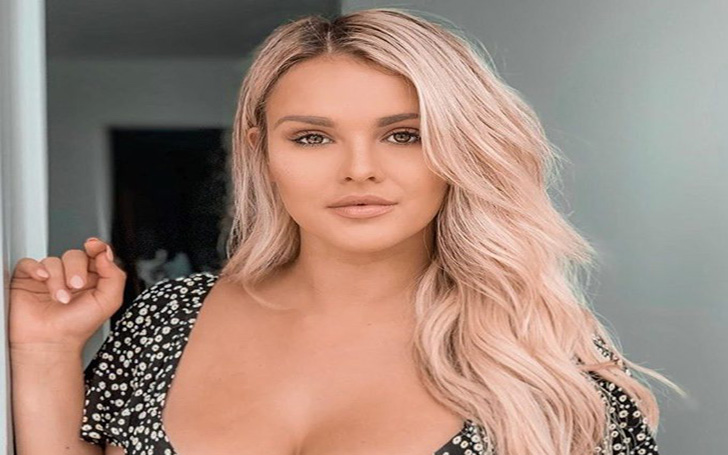 Kinsey Wolanski jokes about being the next model of Victoria's Secret.

Kinsey Wolanski is now one of the most recognizable internet models in the world, and it is hard to imagine a time when she came in eighth in a beauty competition. It is a nice thing she got the eighth place in the competition because she was discovered while her time in Los Angeles and asked to model which meant we get one of the most ravishing models working in Instagram.

Kinsey went from a relatively unknown model on Instagram like many others like her, and then all of a sudden rose to a level where most up and coming models can only aspire of being. Kinsey is currently living the best life, and she recently posted a photo of her near a swimming pool, looking pretty as ever.

The photo is captioned, “Im a Victoria Secret Model. It’s such a secret that not even Victoria knows….” In the photo, she is beside a pool, which looks like the same pool where she showed off her boyfriend, Vitaly Zdorovetskiy. We know it is not the same pool but looks the same; she is leaning from the pool, with her eyes closed and chin up towards the setting sun.

The bright glow of the lights, hitting her face and reflecting her already beautiful complexion, with her right cheek creating a line of glow hitting the top of her chin. Kinsey is wearing a swimsuit with an 8-inch long chain coming down from the bottom of her chest to her belly button. Her signature blond hair flowing in the wind, and glowing in the hot Malibu sun, with the black swimsuit complimenting her look and her hair perfectly.

Kinsey tagged the photo to ‘partylikejzl’ a “photographer, taking original content of the hottest girls on the gram 18+.” The model photographer was tagged on her shadow, probably complementing the lights and the way he took the photo to let her glow do the talking.

Kinsey also tagged Eileen Madrid, who goes by the handle ‘miss_madrid,’ she is a celebrity makeup artist who likes to “paint faces and sip mimosas.” The Champions league streaker tagged the makeup artist on her cheek, complementing on the way she made her look beautiful for the shoot.

The astronomical rise of Kinsey was something no one saw coming, but it all stemmed from one moment of brilliant marketing from her boyfriend. Kinsey was aided by her boyfriend when she streaked during the Champions League Final which resulted in her Instagram page, gaining more than one million followers in a day. Since then the model carved out a small corner of success for herself, even doing daredevil stunts with a dirt bike in California.

Kinsey is one of the fastest-growing models in the world and the way she is handling her newfound fame, replying to almost everyone who comments on her photo, lets us know she cares for the people who love her more than anything in the world.