home Entertainment Who is Telli Swift? Some Facts to Know About Deontay Wilder's Wife

Who is Telli Swift? Some Facts to Know About Deontay Wilder's Wife 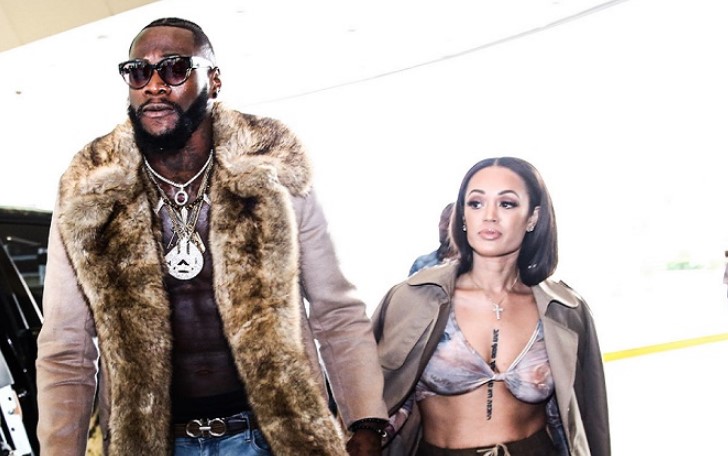 It was undoubtedly a big day for Deontay Wilder, as he had a rematch with Tyson Fury, but sadly he lost via TKO. But what we saw is getting our attention from the event, and we want to know more.

We saw Deontay was cheered by his fiance, Telli Swift, who happens to be a well-known TV personality for her stint on the show 'WAGS Atlanta.' But what do we know more about her and Deontay? We will discuss just that here. So, without further ado, let's find out some of the interesting facts about the Telli and then her relationship with Deontay Wilder.

Who is Telli Swift?

Telli Swift (born Shuntel M. Swift) is a TV personality who got fame for being a celebrity girlfriend as she is dating professional boxer, Deontay Wilder. Swift is a Philippines native, who also is better known as a former XXotic Angels model.

Also See: Who is Justin Thomas’ girlfriend Jillian Wisniewski? How Did the Couple Meet?

Swift was born to her father, Reginald Swift, and mother, Vivian Crawford, on January 24, 1987. She began her modeling career as early as the age of three, which took her to surprising heights in the latter days.

Deontay Wilder and his fiance, Telli Swift, are engaged in 2017.
Source: Mirror

While it's not news the Telli Swift and Deontay Wilder are engaged, the couple shares a twister relationship. When the two started dating, Deontay was still married to his former wife, Jessica Scales.

Despite being married, the professional boxer could not resist staying away from the model and began to get more close to Swift. Eventually, Deontay filed a divorce with his previous wife, Jessica, which was finalized in 2017.

Telli Swift and Deontay Wilder First Met in a Airport

Deontay Wilder and his fiance, Telli Swift, met in a airport for the first time.
Source: Mirror

The couple's eyes struck in a very unusual place. The report suggests, Deontay Wilder and Telli Swift first met in a airport where the couple was instantly struck with a cupid's arrow. After getting to know each other at the airport, the pro boxer slid into models DM on Instagram, and the rest is all history.

Talking with one of the media outlets, Telli recalled, "We saw each other from a distance at check-in, then again at TSA, then he finally spoke to me while we were both going to our gates. We got in touch with each other two weeks before my family reunion, which so happens to be in Alabama where Deontay is from. The rest is history."

Telli Swift and Deontay Wilder are parents share a wonderful daughter, Kaori Lee Wilder, who they welcomed on March 7, 2018. And it's pretty much clear, and it's the biggest gift for the couple, and reason for their lasting relationship.

Swift said, "I  swear having a newborn is like falling in love all over again! The feeling is beyond what words can express!!"

While it's apparent the reality star, Telli Swift is going places with her career boom following engagement with the pro-boxer, Deontay Wilder. The 33-year-old reportedly earns $90,000 per annum, and many sponsors are lined up for her as well.

You May Also Like: Daniel (Danny) Schneider, Jr. - Some Facts to Know About 'The Pharmacist's Dan Schneider's Son

So, if we have to go by what reports suggest, the reality TV personality, who is the founder of Boxing Wags Association INC, has a massive net worth of $30 million, which she earned through her modeling and TV career.