home Entertainment Who is Zombies 2 Star Milo Manheim Dating? Who's His 2020 Girlfriend

Who is Zombies 2 Star Milo Manheim Dating? Who's His 2020 Girlfriend 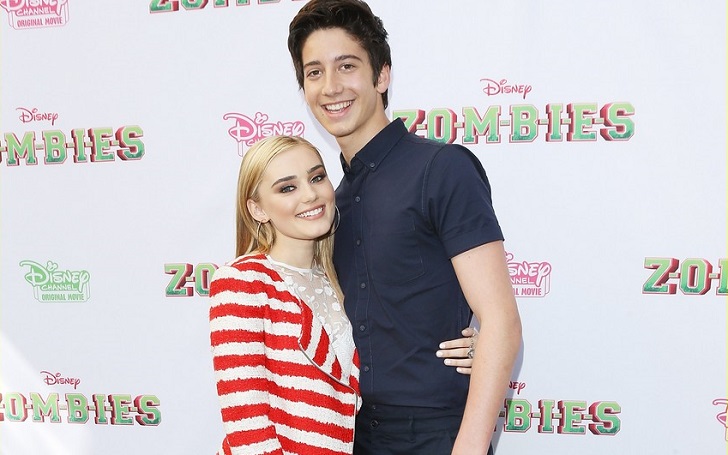 Disney released the second part of its musical, 'Zombies', on Valentine's Day, and people can't help but fall with love with the actors. Milo Manheim and Meg Donnelly are at the center stage of it.

Manheim and Donnelly's characters 'Zed' and 'Addison' are created to be together, but is there anything going on in real life between the stars? Of course, since his days with 'Dancing with the Stars' (and that second-place finish, of course), Manheim is not short of admirers.

A gentleman, for sure, for sure.
Source: Gotpap/Bauergriffin.com

It's only the start of his career at 18 years old, so there'll be lots of stories to tell about him. Even his dating life is already piling up with stories.

Sorry if the title was misleading. But that's what Meg herself said in a recent interview. They are likely not dating that seriously right now, but they've been working together for over a couple of years now. And of course, fans are already starting to ship these two together.

It's been three years, give and take, that the duo started working together.
Source: Ed Herrera, Disney Channel

The two met during the audition process and worked together to release 'Zombie' in February 2018. "We met during the audition process," she told People the day of the movie's release. "On the last one, we really got to know each other. They wanted us to sing a duet and we sang 'Love Is An Open Door' from 'Frozen'. We really relied on each other. And we formed such a special bond."

Find Out If Aaron Gordon is Dating Anyone Right Now?

That doesn't mean anything romantically, though. Giving in 100% for the show, they did find out great things about each other, insinuating it's just professional, nothing funny, because everything they've learned from each other professionally helped them grow as people.

The two are definitely going to work on more projects together, and as Donnelly affirmed, they will be in each other's life even if they don't work on the same thing together. Something in the future for the two then?

Manheim and Alexis Ren contended against each other in season 27 of 'Dancing with the Stars'. But at the time, Ren was linked to his dance partner Alan Bernstein, which was later alleged to be a publicity stunt for the show.

The two were actually linked before Ren said she was interested in Bernstein. But after the show ended, they united again in August 2019 in New York City at the Coachella Music Festival. They had fun in quite an unnatural way, walking hand-in-hand, and sparked another rumor between themselves. Ren even perched up on Manheim's shoulders during the festival.

They were linked yet another time in September when the 22-year-old commented on a post from the 'Zombies' actor's Instagram page. The photo showed Ren leaning on to Manheim's shoulder at a dinner, which looked a little boring for Ren. She wrote, "Love you," along with a big red heart emoji at the end.

She was clearly bored at the event that evening.
Source: Milo, Instagram

However, there actually seems to be nothing between the two as the IG model confirmed in November 2019 that she was dating Noah Centineo, and she was so much in love with him.

Milo was also previously in a relationship with another IG model Holiday Kriegel, but he confirmed their relationship ended by October 2018.

For now, Manheim seems to be single, but there is a high possibility of things working out with Donnelly. Still, there's still time for him to get permanently hitched.