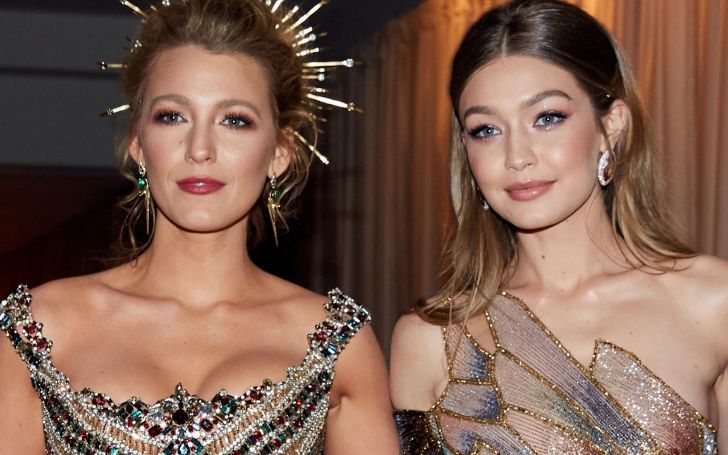 The picture snapped in the kitchen articulated the staggering $16 million fortune holder Blake holding a plate tilted sideways whereas Gigi, 24, posed taking a sip from the cup.

The 24-year-old model shared the photo writing some captivating words for The Shallow star Blake which reads,

It’s this Queen’s birthday week and I just want to say how grateful and lucky I am to have a friend like you, B. You are a real one and inspire me in so many ways. I will only be able to thank you enough by making you endless oatmeal griddle cakes and training your children to be world class disposable-camera photographers. I love you ! Wishing you every blessing. 🥞🧁🎈 @blakelively

The duo is longtime friends of several years and was first photographed together back in October 2014 at the Golden Heart Awards in New York City. But after the traumatic split of Gigi with her four years love Zayn Malik, the supermodel was seen less in social media until the recent dating news fumed with The Bachelorette's runner-up, Tyler Cameron.

Going stronger ever since; the two best friends are often seen on various occasions. Those who are connected with the news might be familiar with Gigi and Taylor Swift, who recently announced to re-record all her past five albums, are in fact sisters.

Blake and Gigi, both the mutual friends to the 'Love Story' hit maker were last spotted back in December in 'The Wizard of Oz' themed party Swift threw.

The Real Housewife of Beverly Hills star was not the only one to surprise the model on her birthday as her sweet and caring husband, Ryan Reynolds also took to his Instagram on Sunday and wished her adorable wife a 'happy birthday'.

Though the Deadpool star didn't write mesmerizing words as Hadid, but shared a series of sweet couple snaps trolling his wife.

But we are yet to hear any reply from the mother of two, Inezs Reynolds and James Reynolds as Lively is recently not active on her social media due to her third maternity.

Nevertheless, the head over heels lovers are an example of one of the Hollywood couple who recently shared the secrets to their blissful relationship. Well, we would like to wish Blake Lively on her 32nd birthday with positive 'hope and love' to see the third one very soon.