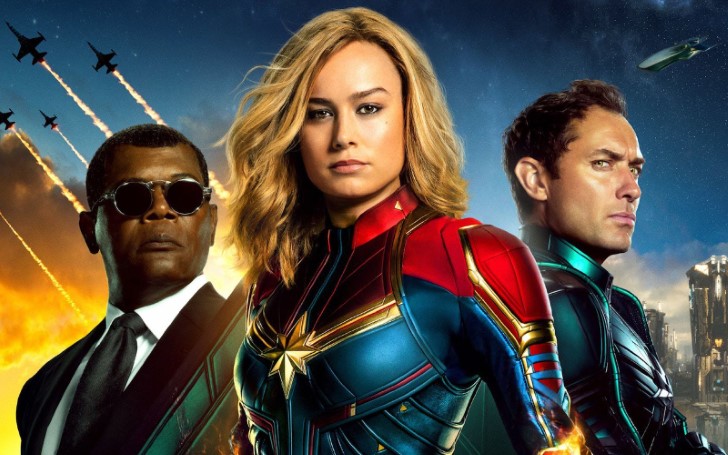 One of the most anticipated Marvel Cinematic Universe films 'Captain Marvel' had its very first premiere on Tuesday.

Based on a comic series back from 1968, 'Captain Marvel' is regarded as one of the most anticipated movies of 2019. Brie Larson replicating the role of 'Captain Marvel' precisely Carol Danvers was hugely loved and admired by the audiences. Similarly, the early viewers found the movie very entertaining along with 90's classical comic vibes. In the very first premiere, the fortunate few got the chance to exclusively witness Jude Law's mysterious character.

Since the very first teaser trailer published on September 18, 2018, the movie made largely positive impressions all around the internet assembling different controversies and predictions. As a result, the movie has already been pre-booked for a month according to MCU.

Besides that, the viewers enjoyed and admired the unique flavor of climax and sequels from the creative director Anna Boden and Ryan Fleck. Furthermore, critics found it somewhat different than other mainstream Marvel movies in the franchise. The unique way of expressing the story along with well-placed comedy was enjoyable as per the pre-viewers.

Check out: Marvel Theory: Here's What Will Likely Happen After Avengers: Endgame

In contrast, some critics didn't find the movie as interesting as originally advertised. Below are some of the mixed critic's feedback for the movie:

#CaptainMarvel has a great ‘90s sci-fi vibe w/ a tone unlike any other Marvel movie, really. It’s retro & trippy, mysterious & dorky. It’s funny in surprising places & badass in all the right places. It remains entertaining because it’s always changing. It’s got the right stuff pic.twitter.com/o7AvqYY63x

Captain Marvel is everything that I hoped it would be. It feels completely unlike any other Marvel film. A unique and fresh take on an origin story that feels new. Brie Larson is fantastic as Carol Danvers. This is one of my favorite Marvel movies of all time. #CaptainMarvel pic.twitter.com/0ou7HU93MY

Captain Marvel is a blast! Has some cool surprises that I definitely didn't see coming, and the mystery/origin it weaves is engaging and fun. Brie Larson is awesome, and makes a fantastic first step into the MCU #CaptainMarvel pic.twitter.com/oqrRtgDQrp

Similarly, there were some negative feedbacks,

I can already tell that Captain Marvel isn't the superhero we expected, but the one that we deserved.

Going through the overall review of the movie resulted in quite good feedbacks. The lucky viewers admired Marvel's first ever female-led standalone film with love and appreciation for its cinematography and story.

The movie is debuted by some of the new faces like Lee Pace (Ronan), Ben Mendelsohn (Talos), Jude Law (Mar-Vell) along with the appearance of SHIELD characters like Samuel L. Jackson (Nick Fury), Anthony Molinari and Bethany Levy.

Kevin Feige-produced Captain Marvel is predicted to make a huge mark in the MCU franchise standing alongside other Marvel hits such as Avengers: Infinity War and Black Panther which grossed millions during its opening days at the box office. The movie is set to be released on March 8, 2019. This shall be followed by the most highly anticipated superhero movie in history, Avengers: Endgame which is releasing merely a few weeks later on April 24, 2019.

Observing the opinions of the overall majority and overlooking the facts like Brie's debut as well as Marvel's first feminine solo film, the movie definitely displays a huge potential to be a blockbuster.