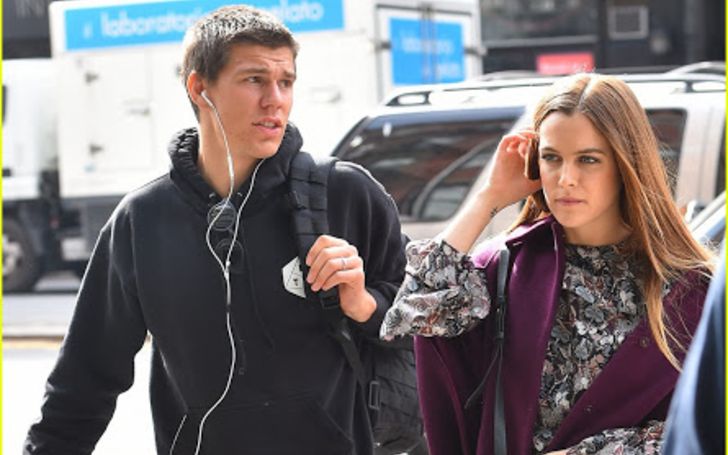 The actress Riley Keough is married to stuntman Ben Smith-Petersen.

Who is Riley Keough? She is an American actress, model, and producer who made her appearance in several popular movies and series until today. Keough has worked in dramas like Magic Mike (as Nora), Logan Lucky (as Mellie Logan), The Lodge (as Grace), and many more.

The 30-years-old Riley was born on May 29, 1989, in Santa Monica, California. She is the daughter of singer and songwriter Lisa Marie Presley and musician Danny Keough. Riley is granddaughter to Elvis and Priscilla Presley, who were a celebrity in the entertainment industry.

Keough's mother, Presley, and her father were married on October 3, 1988; however, their relationship came to an end on May 6, 1994. She then took marital vows with the late legend Michael Jackson, who she met in 1975. Her relationship with Jackson also faced divorce in January 1996. Subsequently, Presley married actor Nicolas Cage and separated in 2004. Then she got tied her knot with Michael Lockwood in 2006, which lasted for ten years. Nevertheless, her mother Keough married life is a success, and we will provide you the details today on this page.

The Star Riley Keough and Her Husband Ben-Smith-Petersen

The Girlfriend Experience cast Riley Keough met her prince charming, Ben-Smith-Petersen, the set of Mad Max: Fury Road. They were working together in that project where Keough was an actress (as Capable), and her beau was a stuntman.

Click To Know: Who is Madelaine Petsch's Boyfriend? Is She Dating Someone in 2020?

The pair were shooting for six months in the desert; however, they only began dating each other after their re-shoot in Australia, according to USA Today. The crew was small, which gave them the opportunity to know each other.

Riley and Her Beau Ben Officially Tied Their Knot on February 4, 2015

After Riley Keough and her then-boyfriend, Ben Smith-Petersen, upgraded their relationship as a husband and wife. The love birds dated for two years to know one another.

However, as per Keough, she always knew from their first encounter, they have something special and saw a bright future with her love Smith-Peterson.

Keough and Smith-Peterson announced their engagement on August 14, 2014. Subsequently, they shared engagement rings, and eventually, the lovers shared their marital vows on February 4, 2015, in Napa, California. Their wedding ceremony was stacked with celebrities, includingKristen Stewart, Dakota Johnson, Cara Delevingne, Courtney Eaton, Zoe Kravitz, and Abbey Lee, according to Pop Culture.

While Riley Keough's mother Presley, was with her dad, they also welcomed a baby boy. She has a young brother, Benjamin Storm Keough, born on October 21, 1992, at Human Women's Hospital in Tampa, Florida. Though he was born in a celebrity family, young Keough loves to keep his personal life private. However, many sources claim he has a girlfriend and is deeply in love with her.

Recommended: Check Out the Wardrobe Collection of Kim Kardashian

Further, the gorgeous performer, Keough, shares half-blood to her step-siblings who were born from her mom's relationship with Michael Lockwood. She has two half-sisters 11, Finley Aaron Love Lockwood, and 10, Harper Vivienne Ann Lockwood.