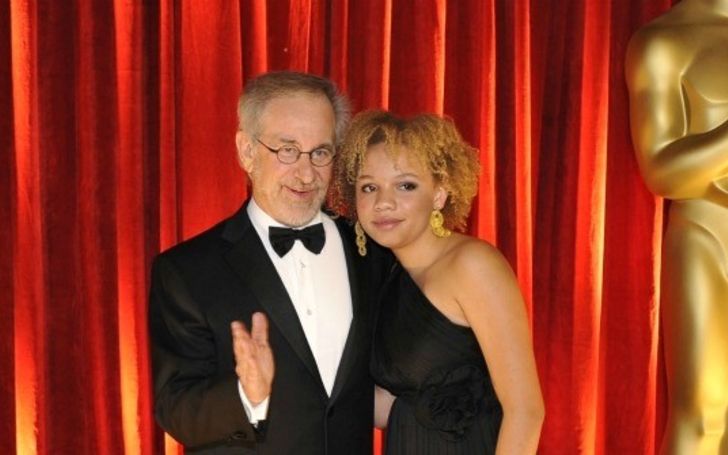 We all love and adore Steven Spielberg as he's been part of our youth by delivering us with some of the nostalgic memories, and fun-filled cinemas from movies such as E.T., Jurassic Park, Raiders of the Lost Ark, Catch Me if You Can and the list goes on.

But besides his professional part, he's also the father of seven kids! And Mikaela Spielberg, the adopted daughter of Steven, 73 and his second wife Kate Capshaw, is recently making headlines for her brave decision to step into the adult film industry. So, to learn why she opted for such a lifestyle and to know part of her 'must hear' story, here we present you with all the details.

Born on Feb. 28, 1996, the second-youngest daughter of Steven is recently making headlines for her unexpected decision to step into the adult industry. Sharing to The Sun, on Monday, The 23 years old who tends his alias name as 'Sugar Star 'shared,

I feel like doing this kind of work, I'm able to 'satisfy' other people, but that feels good because it's not in a way that makes me feel violated. I've always been a very sexually natured person, which has gotten me in trouble before. Not in a predatory way, but just in the sense that people here in the South might not yet be comfortable with that.

The Spielberg family doesn't seem to be bothered by her decision; Talking to the magazine, she shared that she chose the profession to be financially independent and feels totally comfortable using her body.

Snippet of Mikaela with her mother Kate Capshaw and younger sister Destry Allyn.
SOURCE: The Sun

"My main hope is just that I get somewhere lucrative enough to where I'm not tied down financially by things. And then I can really start saying to people there's nothing wrong with me using my body in a way that feels comfortable to support myself, shared Spielberg.

Check Out: Is Sawyer Spielberg Married? Facts about Steven's Son

Among the rest of Mikaela's six siblings Jessica Brooke Capshaw, Max Samuel, Theo (adopted), Sasha Rebecca, Sawyer Avery,and Destry Allyn, she was the one left to mark her debut into cinemas or any relevant field to that. So went to chose the adult industry to be independent from the thing she always loved to.

"I can't stay dependent on my parents or even the state for that matter - not that there's anything wrong with that - it just doesn't feel comfortable for me. This isn't like an 'end of the road' or 'I've hit bottom' choice", shared Mikaela.

Adding on the statement, "this is a positive, empowering choice. I realized there is no shame in having a fascination with this industry and wanting to do something that is safe, sane, consensual."

Had a Traumatic Childhood

Mikaela shares she was abused while growing up; however, she didn't reveal the names but assured it was one of the family members and friends circle.

It impacted her with several mental health issues such as anorexia, anxiety, borderline personality disorder, and alcoholism. Her childhood problems escalated when she was sent to boarding school as she suffered bullying for her last and weight.

As a consequence, it raised her drinking habit, which nearly made her die. But now she has successfully overcome it and doing a lot better. She even credits most of it to her supporting partner Chuck.

Spielberg's Family and Boyfriend Chuck Pankow Supported Her for the Decision

Sugar Star with his supportive boyfriend Chuck,
SOURCE: The Sun

George speaks to her parents regularly, revealed her choice via FaceTime. Initially, she was 'hot and cold' about it; however, the chat ended up it quite a positive way.

George Spielberg insisted that her boyfriend/professional darts Chuck Pankow is supporting her for her new career.

You May Like: Facts about Steven Spielberg's daughter Sasha; Dating anyone?

She thinks she is best suited for fetish works as she hated her largest chest for so long and finally learned to embrace it. And shares that she doesn't want to do outside of the 'solo stuff'.

Not the 'Only' Adopted Child in the Spielberg Family

If you are updated with the family members, then you might well know the fact that the Steven family shares two adopted members in the family who is the thirty years old son Theo who was adopted by mother Kate before even marrying Steven.

Theo is the one who is often spotted with sister Sasha as they run a band 'Wardell' together.

Going a few years back, Steven once shared with the Guardian in 1999 that she h and his wife Kate adopted Mikaela so that "Theo will not be the only black child in the family."

We hope you enjoyed the facts, stay tuned to find out the recent updates and Entertainment news on Glamour Fame.