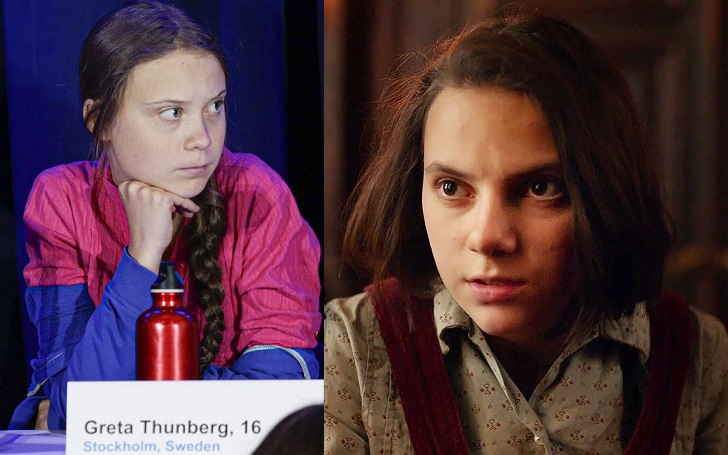 There are a lot of similarities in Greta and Lyra, says 'His Dark Materials' screenwriter Jack Thorne.

In addition to the lead character, 'Lyra Belacqua', in the novel series 'His Dark Materials', the writer for the screen adaptation, Jack Thorne, has a new favorite hero. Teenage Environmentalist, Greta Thunberg, is making raging fire with her speech in the UN, and it seems Thorne very much admires everything she is doing to avoid the climate change catastrophe.

The British writer, along with some of the cast members, was in London for the world premiere of 'His Dark Materials'. Speaking at the launch of the big-budget drama for HBO and BBC, he pulled out some facts from the novel to compare the current British government, and subsequently Greta, to some of the characters.

The 40-year-old correlated the novels' all-powerful and overbearing religious authority group, 'Magisterium', to the current government, which recently denied the pro-environmental Extinction Rebellion protestors from campaigning across London. They were causing disruption to raise awareness of climate change, but the government act, according to Thorne, denied them their right to protest.

"We just saw today a protest being removed from the streets without due process of law, and it was done quite openly by a group of people that felt they were entitled to do it, and they denied another group of people the right to protest."

Lyra is fighting for something. So is Greta.
Source: Reuters

The 'Harry Potter and the Cursed Child' stage-play writer went on to praise the novel series' writer, Philip Pullman, for choosing Lyra's story instead of Asriel's. He believes Asriel's "intent on greatness" is far too obvious a story to be told, and that Pullman was bold enough to choose Lyra's "intent on goodness" instead. The choice was brilliant. In the end, he concluded by his statement of Greta's similarity with Lyra.

And, you know, Greta Thunberg ... Lyra ... there are quite a lot of similarities there. There's so much from what we're going through now that can be drawn on from these amazing books.

After Thorne, Keen also commented on her character as "a force of nature" and showed her pride in getting the role. She hopes every single girl takes something from the show — to "not be scared, go out there, be yourself, because if you're a force of nature, which Lyra is, you will make yourself be seen and heard."

Tranter also revealed the same night that season two of the much-anticipated series is already under production and that they will adapt the books on TV just as they were written. The first season will tell 'Northern Lights', 'The Subtle Knife' will form season two, and Pullman's final book of the trilogy, 'The Amber Spyglass', will be followed in the future seasons. The first season is premiering on November 3 on BBC One and a day later (November 4) on HBO.

Swedish child-activist Greta, on the other hand, was on a mission to warn the world leaders of the impacts their ignorance of climate change is causing to the lives of the future generation. She gave an emotional speech at the 2019 UN Climate Action Summit in New York City by accusing them of stealing her dreams and a chance to live a different kind of childhood.

Watch: Greta Thunberg's Emotional Speech in the UN - "How Dare You!"

Of course, millions of people supported her cause all around the world. It included the likes of Leonardo DiCaprio (who is an environmental activist himself) and Anne Hathaway. But there are bound to be people on the opposition side, but she is encouraged to remain strong and continue doing what's best for the future. She's on a mission, and criticisms won't stop the 16-year-old.

For more Entertainment news, be sure to stop by GlamourFame.