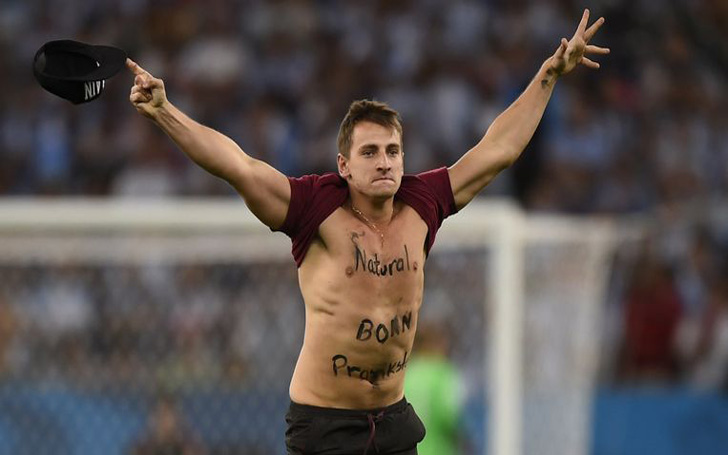 Vitaly Zdorovetskiy took to Instagram to share a hilarious video of him pranking people inside the gym.

Vitaly Zdorovetskiy is one of the most renowned pranksters working today, with over 10 million subscribers on YouTube; there are very few people who can compare to the Russian Guy with a camera from VitalyzdTv. Vitaly shot to international fame after he went streaking during the world cup finals match between Germany and Argentina in 2014. Since then he streaked during NBA finals with his chest reading Donald Trump Sucks, but except for the streaking video, there is one thing he is most popular for prank videos.

Go visit his YouTube channel, and you will find a plethora of pranking videos, but it is not the only place where he posts prank videos. Vitaly posted a video on his official Instagram page with him pranking people in the gym, and it is hilarious.

To start the video, Vitaly approaches a bald man sitting on a triceps machines, he takes out his phone and starts speaking gibberish then tells the man to get off the machine. The man gets off his machine and tells Vitaly he won’t get off the machine, and he still needs to do two more sets of the triceps exercise, and he teases the man he probably got two more phone calls instead of sets.

The next person to catch some flak from the pranker was another older man who was texting on his phone. He tells the person, “Maybe if you start texting with your legs, it will get a little bigger.” The laughs and gets up from the chair and shakes Vitaly’s hand and asks for his name.

The third prank was hilarious as Vitaly approaches a man sitting on the butterfly machine. Vitaly puts on his mask and tells him he is his doctor; the man was on the phone for such a long time, Vitaly thought he was on his phone with the doctor to get some steroids. The man sitting in the machine was playing a game, and Vitaly tells him he is disqualified. The quick quips are what makes this man so hilarious and amazing.

Next one is no quips, Vitaly just walks over to a chest machine where a large dude is texting, and Vitaly just takes his phone and walks away from the man as he starts to chase him. Another person caught some words by Vitaly as he accuses them of jerking off in the gym then rephrases the word to beating your meat.

Then to finish the video, Vitaly circles back to the man he started the video with, the bald guy with a white vest who is still on the phone. Vitaly walks over to his blindside and screams, “get off your phone,” and the man flinches. Vitaly then tells the man to “get that sweaty ass out of here,” which prompts the man to get away from Vitaly.

Well, the whole video was hilarious, and Vitaly keeps on building on the hype he and his girlfriend, Kinsey Wolanski, garnered after she streaked across the field during the 2019 Champions League final. They tried to go the same thing during the Copa America final, but 20 security guards tackled Vitaly before they could get down to business.

Following in her son’s and his girlfriend’s footstep, Vitaly’s mother also tried to streak during the ICC World Cup final between England and New Zealand, but she was stopped before she could even get over the advertisement board. Vitaly made a lot of money after the streaking incident, and it was a considerable bump in the net-worth of Vitaly. Though the next streaking incident is not known at this moment, we did see Vitaly holding a try-out for a new girl to go streaking. We think the UEFA Super Cup is the site of the next streaking attempt but whether it happens or not is to be seen.