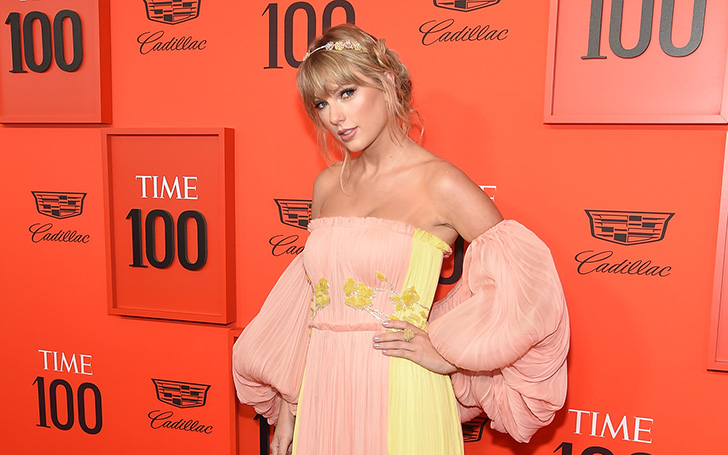 The 15th annual TIME 100 gala was held on Tuesday.

The gala is all about celebrating TIME's list of the world's most influential people which took place at the Lincoln Centre in New York City.

Many celebrities attended the event and three paragons of style - Taylor Swift, Brie Larson, and Emilia Clarke - led the luminaries as they arrived at the Frederick P. Rose Hall for the fabulous soiree.

The 29-year-old singer, Swift opted for a fairy-tale pink and yellow gown by J. Mendel from the Spring Collection featuring an off-the-shoulders design and billowing sleeves.

The star accessorized her look with a custom ombre yellow pair of the Chloe Gosselin Tori sandal and a floral headband by her go-to custom jeweler Lorraine Schwartz. Hair kept in a Renaissance-style braid and nude lips completed her look.

Swift was joined by her girl squad Martha Hunt, Abigail Anderson, and Ashley Avignone. But her boyfriend Joe Alwyn whom she started dating in September 2016 was absent.

When it comes to Larson, she went for a revealing green number. Her light green shimmering gown featured a sweetheart neckline and unique tea pockets which Larson used with aplomb during her shutterbug session.

Captain Marvel star kept the look minimal with no jewels and kept her hair back in a slick bun.

Meanwhile Game of Thrones star, Emilia aka Daenerys Targaryen rocked the event in a red number.

She teamed a sheer red lace corset with a matching chiffon skirt and completed the outfit with a silk ribbon waist belt.

Emilia styled her brunette locks into a sleek blow-dried hairdo, she added a slick of make-up which included red lipstick.

In the event, she and Richard Madden couldn't resist using the star-studded event as an opportunity to reunite, after being honored on the 2019 list.

The gala is attended by many other stars with their amazing outfits such as Rami Malek, Dwayne Johnson, Naomi Campbell, and Sophia Bush among others.