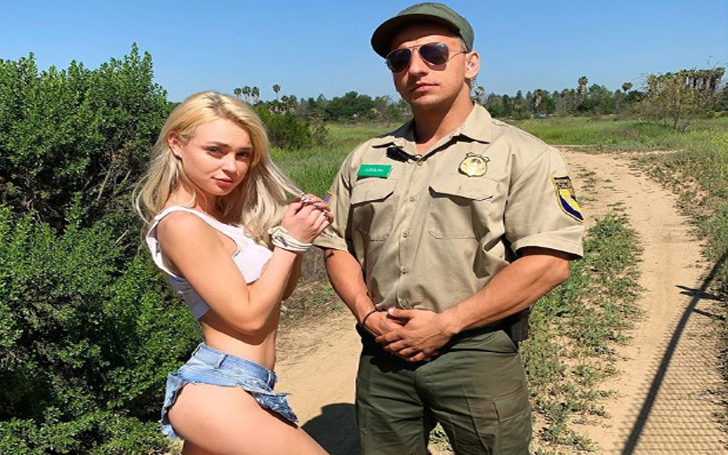 A new model made her way to Vitaly's video in a new "Escaped Sex Slave" video.

Vitaly Zdorovetskiy is known from providing adult porn-prank content on his monthly subscription website Vitaly Uncensored, and he also provides videos pranking people on his YouTube channel as well as Instagram. Two days ago, the man who ran on to the pitch of 2014 FIFA World Cup Final with his torso reading “Natural Born Prankster,” took to Instagram to share a snippet of his gym prank video. Then yesterday he posted a video of him hanging from a plane and finally, today he is back making content for his exclusive site.

In a photo posted 11 hours ago, Vitaly is seen alongside a new model Ariel Ice who he met some 14 weeks ago. The aspiring Instagram model is seen on the photo with her hands tied and standing beside Vitaly.

The two are out in the field with Ariel holding up her tied hands up to her chest covering her breasts. You can see a crease of torn t-shirt which goes in line with the caption Vitaly used to share the photo, “Escaped Sex Slave is now on VitalyUncensored.” In the photo, we can see a shadow of a fence, and Vitaly is wearing what appears to be a California border patrol uniform. The story seems simple, an escaped sex slave with a torn t-shirt and torn pants find the border patrol and maybe he “rescues” her.

This video is going to do a lot for the budding career of the model who currently boasts a 128k following on Instagram. Ariel also made the photo her story and wrote, “My sex slave prank with @vitalyzdtv is now up on vitalyuncensored.com Don’t miss it,” with devil emoji at the end.

In a plethora of models coming to the prankster, she is currently our favorite, and the video is really awesome, check it out on the Vitaly's site.

Vitaly currently dates a beautiful Instagram model and celebrity who rose to international fame after she wore a leotard and ran onto the field during the Champions League Final between Liverpool and Tottenham. Vitaly’s mother also got in on the action to promote the site of Vitaly, and she tried to do the same thing her son, and Kinsey Wolanski pulled off, and she tried to streak during the ICC World Cup final between England and New Zealand. Vitaly’s mother was unsuccessful, and she was grabbed before she got over the advertisement board, but it wasn’t as bad as what happened to Vitaly during the Copa America Final when 20 security guards arrested him in Brazil after he and his girlfriend tried to recreate their incident.

Vitaly may be busy making videos for his exclusive site, but it doesn’t mean he is going to stop the streaking incidents and we are betting he is going to attempt another stunt during the 2019 UEFA Super Cup. Vitaly recently held a tryout for his next streaker, and we suspect he is going to try it sometime in the future again. But for now, enjoy the sex slave prank video on Vitaly Uncensored.